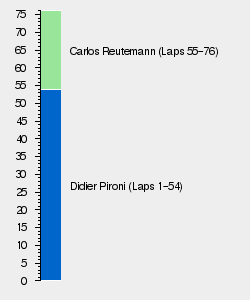 The 1980 Monaco Grand Prix was the sixth round of the 1980 Formula One Season. In the wet conditions, Carlos Reutemann took the win ahead of Jacques Laffite and Nelson Piquet.

Heading into the Monaco Grand Prix,  René Arnoux remained the driver's championship leader with a three point lead over Alan Jones. One point adrift of Jones was Nelson Piquet whilst following his Belgian win, Didier Pironi had brought himself into the championship fight being only four points off leader Arnoux.

Similarly in the Constructor's championship, Williams was back in the lead of the championship with Ligier a close second, two points behind. Renault and Brabham were third and fourth.

Below is the full entry list for the 1980 Monaco Grand Prix:

Didier Pironi maintained his lead into the first corner ahead of Carlos Reutemann, Alan Jones, Jacques Laffite, Patrick Depailler and Nelson Piquet. Down in the tail end of the field there was carnage into the first corner. The tight entry into turn 1 saw all the cars bunched together, Derek Daly was too late on the brakes and crashed into the back of Bruno Giacomelli. The Tyrrell driver was flung into the air, careering over the top of Alain Prost's and teammate Jean-Pierre Jarier's cars. All four drivers were out of the race, Jan Lammers and Riccardo Patrese also sustained damage but were able to limp back to the pits for repairs. Despite the severity of the accident, all the drivers emerged unscathed.

On the second lap, Jones was able to overtake teammate Reutemann for second position. The first several laps saw the Williams and Ligier cars break away from the rest of the field. Pironi led with Jones, Reutemann and Laffite hot on his heels. On lap 12, Gilles Villeneuve had to pit for new tyres, the Ferrari driver running well in seventh had to pit following severe degradation, effectively ruining his race.

In the lead battle, Reutemann and Laffite began to drop back as Pironi and Jones continued to battle for the lead. However as the duo met the backmarkers, Pironi was able to get through the traffic much more effectively than Jones, the Williams driver slowly dropping back. To further add to the Australian's misery, on lap 24 Jones pulled into the pits to retire with differential failure.

Villeneuve, who had dropped back due to his pit-stop early in the race was making a comeback through the field, overtaking both René Arnoux and Riccardo Patrese in an highly aggressive manner to move into ninth place by the middle stages of the race.

After a strong drive, Patrick Depailler was forced to retire from fourth position due to an engine failure, the Frenchman stopping at the Loewes hairpin. By this time a light rain had hit the circuit. The first driver to be caught out by the rain was Arnoux's Renault who crashed into the barriers. Didier Pironi who seemed to be comfortably leading at the front and set to take his second victory in a row clapped the barriers at the Casino corner. Pironi's front left wheel was all askew and he came to a stop, parking his car down the escape road at Mirabeau.

This meant that Carlos Reutemann inherited the lead, enjoying an enormous lead over Jacques Laffite. Reutemann was left to take a comfortable first win of the season. In the final laps, Nelson Piquet had began to apply heavy pressure to Laffite in second. On the last corner of the last lap, Piquet nearly overtook Laffite however the Ligier driver was just able to cling on to second when crossing the finishing line.