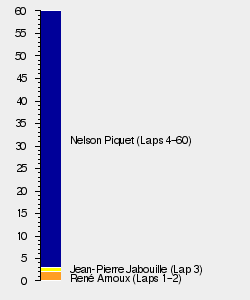 The 1980 Italian Grand Prix was the twelfth round of the 1980 Formula One Season. This race marked the only time the Italian Grand Prix has not been raced at Monza, instead the Autodromo Dino Ferrari was used for the first time in Formula One. The inaugural race was won by Nelson Piquet ahead of Alan Jones and Carlos Reutemann.

Jochen Mass was still out of action following his neck injury that occured during qualifying for the Austrian Grand Prix. Arrows filled his place with sportscar racer Manfred Winkelhock.

Following Alan Jones's failure to score any points in the Dutch Grand Prix, his lead had been narrowed down to two points with Dutch winner Nelson Piquet right back into the championship fight. Williams still had a comfortable lead over the constructor's championship.

Below is the full entry list for the 1980 Italian Grand Prix:

The Renault's once again dominated qualifying, René Arnoux took a convincing pole position ahead of teammate Jean-Pierre Jabouille. Championship leader Alan Jones was in a lowly sixth place, one behind main rival Nelson Piquet. Gilles Villeneuve tested out the new Ferrari 126 C, the successor to the Ferrari 312T series which having been in use since 1974 was now a heavily outdated package. The requirement for a completely new chassis was evident in Ferrari's dismal 1980 campaign. The new car proved quick but unreliable, Gilles Villeneuve the sole driver testing the new chassis did well enough to put the car on eighth on the grid. The successful qualifying debut boded well for the team's 1981 campaign where the car would make its race debut.

Meanwhile Jody Scheckter who had been running a terrible title defence in 1980, scoring only once in the season was becoming increasingly disillusioned with Formula One. It was evident he would not remain with Ferrari in 1981 and his Formula One future seemed to be increasingly in question. Confirmation on Scheckter's future was given when he crashed heavily in the run down to Tosa. Scheckter got out of his car and mysteriously disappeared from the circuit. The next day he confirmed his retirement from the sport at the end of the season.

Arrows driver Manfred Winkelhock who hoped to make his debut in Italy, spun off the circuit and smashed into the third Lotus car of Nigel Mansell. Both cars were wrecked forcing both driver's out of qualifying and therefore out of the race.

Carlos Reutemann got a flyer of a start to take the lead, however seconds later his clutched seized and he dropped right down the order. Reutemann's sudden drop of pace caused the mid-field to get all out of shape, Vittorio Brambilla nearly spinning off the circuit. With Reutemann's problems, René Arnoux therefore kept his lead ahead of Jean-Pierre Jabouille, Nelson Piquet, Bruno Giacomelli, Gilles Villeneuve, Héctor Rebaque and Alan Jones.

On the third lap, Jabouille and Piquet moved ahead of Arnoux who dropped from first to third. A lap later, Villeneuve moved ahead of Giacomelli to take fourth position. The same lap, Piquet took the lead from Jabouille going into the second last corner and immediately began to pull away.

Brambilla in his final F1 race, spun off the circuit on lap four to end his Formula One career. Lap six saw Villeneuve suffer a tire failure going straight on in the corner before Tosa, Villeneuve's Ferrari was destroyed in a big way, Giacomelli's Alfa Romeo collected some of the debris and spun off the circuit causing both cars to retire. This accident allowed Alan Jones to move into fourth position with Jean-Pierre Jarier and John Watson going into fifth and sixth. Watson would go on to retire with brake problems on lap 20.

Jarier then spun off the circuit with brake failure ending a strong day for Tyrrell. With seven laps to go, Jabouille pulled into the pits with another predictable mechanical problem. At the front Jones continued to lap well, however Piquet continued to hold an edge over the Williams driver, the Brabham running that little bit better than the Williams. Piquet took a convincing win, 28 seconds ahead of Jones. Reutemann made a good comeback drive to finish third. Elio de Angelis took fourth on home turf with Keke Rosberg finishing fifth ahead of Didier Pironi.