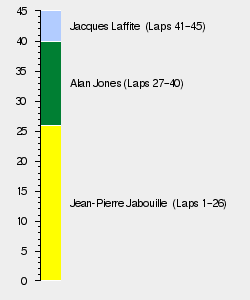 The 1980 German Grand Prix was the ninth race of the 1980 Formula One Season. The race was won by Jacques Laffite in his Ligier ahead of the two Williams cars of Carlos Reutemann and Alan Jones.

A week before the Grand Prix was held at Hockenheim, a week of pre-race testing occured at the circuit in preparation for the event. Sadly this test session saw the death of Alfa Romeo driver, Patrick Depailler. Depailler was killed when his Alfa Romeo suffered a suspension failure at the highspeed Ostkurve, Depailler was pitched into the barriers at full speed, flipping his car upside down on top of the guardrail. The Alfa then proceeded to skid along the top of the guardrail before flipping back upright. Depailler suffered massive head injuries and was killed instantly. Following the death of Depailler, Alfa Romeo opted to only enter a single car into the German event for Bruno Giacomelli.

Harald Ertl made his return to Formula One for the first time since the 1978 Italian Grand Prix. Ertl entered the grand prix in a one-off appearance in the second ATS car.

Below is the full entry list for the 1980 German Grand Prix:

Alan Jones maintained his lead into the first corner with the two Renault's of Jean-Pierre Jabouille and René Arnoux on his tail. Nelson Piquet made a terrible start dropping down to twenty third position. As the cars entered the back half of the circuit, Jabouille moved through the inside of Jones to take the lead of the race. Jacques Laffite had meanwhile managed to overtake the second Williams of Carlos Reutemann for fourth place. Reutemann would drop further back as the second Ligier car of Didier Pironi managed to overtake him.

Keke Rosberg in the new Fittipaldi car was doing well overtaking Reutemann for sixth. Rosberg's charge was brought to an end when he was forced into the pits with rear wing issues, the Fittipaldi driver would shortly after be forced to retire. The next of the front runners to retire was Didier Pironi's Ligier, the Frenchman pulling into the pits on lap 18 with transmission problems.

The Renault cars of Jabouille and Arnoux who were running well in first and third, the turbo charged cars running well on the long straights of Hockenheim would soon see their luck dramatically turn. Arnoux was the first to retire, going out with engine trouble on the 26th lap. One lap later Jabouille's rotten luck struck again as he was forced to relinquish the lead and retire from the race with the exact same problem.

After a poor start to the race, Reutemann now in third began to put pressure on Laffite in second position. Jones who was set for his fourth win in a row ( including the non-championship Spanish race ) suffered a puncture in his front left tyre. Jones was forced into the pits where he would drop to third behind Laffite and Reutemann. Jones exited the pits a long way ahead of the squabbling trio of Nelson Piquet ( who had climbed back to fourth from last ), Elio de Angelis and John Watson. Watson would pull into the pits to retire his McLaren with engine failure on lap 39. With two laps to go, De Angelis would also be forced to retire, wheel bearing issues being his downfall and sending him into the pits.

This meant that Bruno Giacomelli, the sole Alfa Romeo competing following the tragic death of Patrick Depailler finished fifth ahead of Gilles Villeneuve scoring a lone point in Ferrari's dreadful 1980 season. Laffite took the race win, his luck changing following his near win in Brands Hatch ahead of the two Williams cars of Reutemann and Jones. Nelson Piquet did well to make a comeback to fourth place following his poor start, even closing on Jones at the end, but must have wondered if victory would have been possible with a good start.