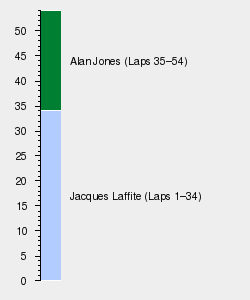 The 1980 French Grand Prix was the seventh race of the 1980 Formula One Season. Alan Jones won the race in his Williams beating the French Ligiers on home turf, Didier Pironi and Jacques Laffite finishing second and third.

Following the 1980 Spanish Grand Prix which was failed to be sanctioned by the FIA due to the issue of non-payment, the race failed to be classfied within the world championship. This meant that the French Grand Prix would in fact be the seventh round of the championship, the points that would have been earned in Spain were nullified and thus the standings following Monaco would continue to stand heading into France.

The issue surrounding the payment of fines by the FOCA drivers was resolved heading into France, the driver's at long last paying their fines which ensured the legitimacy of the French Grand Prix would not be questioned and would indeed be counted to the world championship.

There was some small changes to the driver line-up heading to France. Marc Surer returned to the cockpit of the ATS after being out of action since South Africa after he had broken his legs during the qualifying session. His temporary replacement Jan Lammers was now out of the team, however Lammers would find solace as the new driver for the Ensign team. Ensign having replaced Patrick Gaillard after only one race.

Below is the full entry list for the 1980 French Grand Prix:

Jacques Laffite maintained his lead into the first corner, followed by René Arnoux and Didier Pironi. Going into the third corner Pironi made a lunge down the inside of Arnoux to make it a Ligier 1-2. Jean-Pierre Jabouille and Ricardo Zunino failed to make it off the start line due to mechanical troubles.

Heading into the second lap, Arnoux and Pironi squabbled for second place. Arnoux briefly got by before Pironi retook second. Whilst this occured, Laffite began to pull away at the front. The third lap saw Arnoux overtake Pironi going down the Mistral Straight, whilst at the same time Nelson Piquet had overtaken Carlos Reutemann for fifth place. The same lap saw Elio de Angelis pull into the pits to retire with a clutch failure.

The fourth lap saw Alain Prost overtake Reutemann for sixth, Arnoux had began to pull away from Pironi as the Ligier driver began to fall into the clutches of Alan Jones. The end of the lap saw Jones overtake Pironi and then begin to put pressure on Arnoux.

The following lap Jones dived down the inside of Arnoux, however whilst he managed to claim the place, Pironi surprised both of them by slipping down the inside of Jones at the same time. Prost then pulled out of the race to retire with transmission troubles.

Gilles Villeneuve had done a good job to climb to seventh from eighteenth on the grid where he began to pressure Reutemann's Williams. Arnoux began to experience throttle problems and fell into the clutches of Piquet and Reutemann. The seventh lap saw Jones finally overtake Pironi going down the Mistral Straight.

Lap eight saw Piquet overtake Arnoux for fourth place. Bruno Giacomelli had meanwhile pulled into the pits to retire with handling issues. Keke Rosberg had also spun into the sand and retired from the race.

Lap 10 saw Mario Andretti pull into the pits with gearbox issues, whilst he was able to get going again he exited the pits right in the middle of the Arnoux-Reutemann battle, costing Reutemann a couple of seconds as the Williams driver having to make his way around the backmarker of Andretti. Andretti would retire eight laps later, his gearbox issues proving terminal.

Lap 19 saw John Watson overtake Villeneuve for seventh. Villeneuve had in the meantime dropped significantly back from Reutemann in sixth.

Laffite had largely dominated the race, however getting to the mid-point of the race he began to suffer from tyre degradation. This meant he slowly began to fall into the clutches of Alan Jones behind him. Soon enough Jones was climbing all over the back of Laffite, eager to find a way past. Soon enough on lap 35, Jones made his move down the Mistral Straight to take the lead of the race.

Pironi then began to apply the pressure to his slower teammate and on lap 40 he made his own move on Laffite to move into second place. The order stayed the same until the finish, Jones took a comfortable win ahead of the Ligier's of Pironi and Laffite, Piquet was a distant fourth whilst Arnoux was able to successfully hold off Reutemann throughout the race to finish fifth.