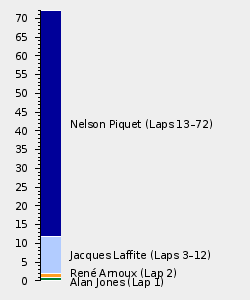 The 1980 Dutch Grand Prix was the eleventh round of the 1980 Formula One Season. Nelson Piquet took the race win ahead of René Arnoux and Jacques Laffite.

Alan Jones and Williams continued to increase their championship lead in Austria. Jones was now eleven points clear of Nelson Piquet in second whilst Williams had a massive lead in the constructors standings, 36 points clear of Ligier in second.

Alfa Romeo had finally found a replacement for Patrick Depailler who was killed in testing during the lead-up to the German Grand Prix. Vittorio Brambilla, the now semi-retired Formula One veteran would make his return for the team. Brambilla had raced part-time for Alfa during 1979 and helped the team out in some of its testing duties throughout the current season. Brambilla would partner Bruno Giacomelli as a temporary replacement.

Jochen Mass, who sustained a neck injury during qualifying for Austria and therefore could not participate in the race attempted to return for the Dutch race. Although he competed in practice, Mass felt the neck pain was too extreme and withdrew from the event. Arrows gained the permission of Tyrrell to use their test driver, the 19 year old New Zealander Mike Thackwell in the event. Thackwell would become the youngest driver to ever enter a Formula One race, despite his inexperience Thackwell was a well regarded Formula Two driver and a protege of current championship leader Alan Jones.

Ensign also had brought a second car to the Dutch event, former Shadow driver Geoff Lees would make an appearance alongside regular driver Jan Lammers in the event. Nigel Mansell also continued to act as third driver in the Lotus team.

Below is the full entry list for the 1980 Dutch Grand Prix:

Alan Jones got a flying start to move from fourth to first going into the first corner. Jacques Laffite did well to move up into third place behind René Arnoux. Jones immediately began to open up a lead, however on the second lap he went over a kerb a bit too aggressively and in the process damaged one of his skirts. The Williams driver immediately began to experience handling issues and began to drop behind the rest of the pack. Jones trawled back to the pits, his race effectively ruined after only two laps. His mechanics were able to repair the damage but he returned to the race several laps down and well out of the running.

On the second lap, Didier Pironi and Elio de Angelis collided sending both drivers out of the race. Arnoux led the field ahead of Laffite, Carlos Reutemann, Jean-Pierre Jabouille, Nelson Piquet, Gilles Villeneuve and Bruno Giacomelli. However this order was not to remain, by the end of the third lap Laffite dived down the inside of Arnoux to take the lead of the race for Ligier.

Jabouille was then able to move ahead of Reutemann as Villeneuve overtook Piquet. Jabouille then began to suffer his customary mechanical problems and was forced into the pits. He was eventually able to get going again but soon retired with handling issues.

Villeneuve then moved into fourth, going past Reutemann demonstrating a rare competitive form for Ferrari in 1980. Reutemann began to drop back, Piquet also moving ahead of the Williams driver. Piquet's Brabham now the fastest car on track overtook Villeneuve and by lap eleven had also overtaken Arnoux and set about hunting down race leader Laffite.

Lap 13 saw Piquet take the lead from Laffite where the Brabham driver immediately began to open up a lead in the race. Villeneuve who was doing a good job in fourth place then began to suffer from tire trouble and began to drop down the order behind Giacomelli and Reutemann.

Down in the lower end of the field, Geoff Lees and Vittorio Brambilla had a coming together on lap 21 sending both drivers out of the race. Arnoux, in third position had begun to suffer from brake problems and began to fall back into the clutches of the flying Giacomelli. Giacomelli moved ahead of the Renault driver and began to close on Laffite's Ligier. An over optimistic Giacomelli tried to overtake Laffite, succeeding only in spinning off the circuit and damaging his skirts. Giacomelli briefly returned to track before having to retire, wasting some much needed points for Alfa Romeo.

On lap 61, for the second race in succession Derek Daly had a spectacular brake failure in his Tyrrell. Daly speared nose first into the tire barrier, hitting the barrier at such force that his car flipped over the top of the barrier. There was some scare when Daly failed to exit the car, the marshalls being forced to lift him out of his stricken Tyrrell. Daly however managed to walk away unscathed although he was badly shaken by his enormous accident.

In the closing laps, Arnoux was able to find some pace and was able to overtake Laffite for second position. Piquet took a commanding victory ahead of Arnoux and Laffite. In the minor points placings, Reutemann was fourth ahead of Jean-Pierre Jarier and Alain Prost.

Retrieved from "https://f1.fandom.com/wiki/1980_Dutch_Grand_Prix?oldid=80926"
Community content is available under CC-BY-SA unless otherwise noted.