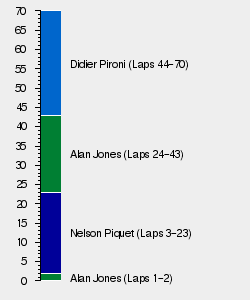 The 1980 Canadian Grand Prix was the thirteenth race of the 1980 Formula One World Championship. Alan Jones won the race and in doing so secured his one and only world title, becoming the second Australian after Jack Brabham to win the Formula One World Championship. Williams took an one-two finish in this race, with Jones' team-mate, Carlos Reutemann, finishing second. Didier Pironi of Ligier finished third.

Heading into Canada, Brabham driver Nelson Piquet held a one point lead in the driver's championship over Alan Jones in the Williams.

Vittorio Brambilla had retired from Formula One in Italy, so his place in the Alfa Romeo team was taken by a young debutant called Andrea de Cesaris. RAM had entered a second private Williams to partner Rupert Keegan, successful CART racer Kevin Cogan. Tyrrell had decided to enter a third car for their test driver Mike Thackwell. The 19 year old Thackwell had previously attempted to enter a race for Arrows in Holland. Jochen Mass returned to the cockpit of the Arrows following his neck injury in Austria, although the team had brought youngster Derek Warwick in case Mass was not up to the job. Lotus had also dropped their third car of Nigel Mansell for the North American races.

Below is the full entry list for the 1980 Canadian Grand Prix:

Nelson Piquet, from pole failed to get the best of starts, Didier Pironi moved up the outside of him in an attempt to take the position, however Alan Jones had stormed up the inside. Piquet, refusing to give away in the kink before the first corner saw the two championship rivals collide. Piquet went spinning into the wall, causing the mid-field to bunch up and cause a chain reaction of collisions. Alongside Piquet, Derek Daly, Jean-Pierre Jarier, Gilles Villeneuve, Emerson Fittipaldi, Keke Rosberg, Mario Andretti and Jochen Mass were all eliminated as a result of this incident.

On the second re-start, Pironi made a suspiciously strong start to overtake Piquet. Jones had also made a strong start taking Piquet as well to move into the lead of the race. The poor start would not deter Piquet and soon enough he was back in the lead moving ahead of both Pironi and Jones. Further down the field, Riccardo Patrese crashed out whilst a lap later Bruno Giacomelli ruined another chance for good results when he spun out of fourth place, damaging his car and forcing himself into retirement. With Giacomelli's retirement, this meant John Watson took fourth who was doing a solid job for McLaren.

Piquet began to immediately open up a strong lead, championship rival Jones seemingly unable to match him. However on lap 24, Piquet's engine blew sending him out of the race. All Jones needed to do to win the title was to win the race, if he won the point's defict to Piquet would be too great for him to be overtaken at the final round at Watkins Glen.

Jones, however was not unscathed following his collision with Piquet in the first start. The rear of his car was somewhat damaged which was allowing Pironi to close on the rear of him. As this occured, Alain Prost in the second McLaren was running a very strong race, he had overtaken Jacques Laffite early in the race and then on lap 25 he moved ahead of Carlos Reutemann to take fourth place, putting him behind teammate Watson.

The same lap, there was a major disaster. Jean-Pierre Jabouille who was running well down the field, the Renault car not competitive around the Montreal circuit suffered a suspension failure pitching Jabouille into the barriers at full speed. Jabouille suffered serious leg injuries, breaking both his legs. The fire team had to cut the incapacitated Jabouille out of the car before he was rushed to hospital.

Late in the race, a minute time penalty was handed to Pironi for jumping the start of the race. As a result Jones let Pironi through rather than risk further damaging his car in fighting the Ligier driver. Prost had meanwhile caught up to the rear of McLaren teammate Watson and was challenging for third place, however on lap 41 Prost suffered a suspension failure pitching him into the barriers and ending his terrific drive. In the closing laps Watson also spun, which resulted in him dropping behind Reutemann and back down into fourth place.

Whilst Pironi took the chequered flag, his time penalty dropped him down to third behind the two Williams cars of Alan Jones, the new world champion and Carlos Reutemann. Watson finished fourth for McLaren ahead of Gilles Villeneuve and Héctor Rebaque.