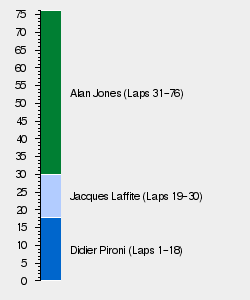 The 1980 British Grand Prix was the eighth round of the 1980 world championship, being held at Brands Hatch. It was won by Alan Jones ahead of Nelson Piquet and Carlos Reutemann.

Heading into Britain, the entry list notably lacked the presence of the Shadow team. The team had an appaling season, qualifying for only one race in the non-championship Spanish Grand Prix. The new team owners under Teddy Yip had decided to shut the team down after six years of competing, hoping to relaunch the team under the new Theodore guise for 1981 in a much more competitive state.

Ricardo Zunino had failed to live up to expectations in Brabham, whilst his teammate Nelson Piquet was competing at the front of the field, Zunino struggled to even compete in the mid-field leading him to be sacked. Brabham replaced him with another firm number two driver to Piquet, Mexican driver Héctor Rebaque. Rebaque had previously competed in F1 with his own team, however he had failed to produce any decent race results leading many to believe Rebaque was signed on by Bernie Ecclestone purely as a pay driver and number two like Zunino was.

With the loss of Shadow, the field was bolstered by the entry of the RAM team who entered privately owned Williams cars. RAM was the leading team in the British Formula One series, entering Rupert Keegan and female racing star Desiré Wilson.

Fittipaldi had arrived in Britain with a new car for team leader Emerson Fittipaldi, the double world champion would be racing the new Fittipaldi F8. Teammate Keke Rosberg would have to wait until Germany for the new car.

The full entry list for the 1980 British Grand Prix is outlined below:

Once again qualifying was a battle between the Ligier and Williams cars. The Ligier's came out on top, Didier Pironi took pole position and in doing so shattered the previous lap record that was set in 1978 by Carlos Reutemann. Jacques Laffite was second while the two Williams cars of Alan Jones and Reutemann were third and fourth.

Rupert Keegan had an enormous accident during the session, wrecking his RAM entered Williams. Luckily for him, his car was rebuilt in time for the race.

The full qualifying results for the 1980 British Grand Prix are outlined below:

Didier Pironi immediately began to open up a lead in the race, the order behind him remained much the same, however Nelson Piquet was able to get ahead of Carlos Reutemann for fourth place. Patrick Depailler had also managed to move ahead of Alain Prost for seventh position.

As Pironi began to pull away in the lead, teammate Jacques Laffite had began to hold up Alan Jones and Nelson Piquet behind him. Reutemann had meanwhile began to drop back into the clutches of the two Alfa Romeo's of Bruno Giacomelli and Depailler.

After a few laps, Laffite began to pull away as Jones fell into the clutches of Piquet. Lap six saw, Jean-Pierre Jabouille once again pull off the circuit to retire his Renault.

By lap 12, Depailler had managed to make his way past teammate Giacomelli to move into sixth position. On lap 17, Giacomelli would come into the pits requiring new tyres. Two laps later disaster had struck for Pironi once again. His front left tyre went flat, forcing him into the pits. Pironi would rejoin the race at the back of the field.

The following lap, Gilles Villeneuve pitted to fit a new monocoque onto his car. Patrick Depailler, who was running in fifth was forced into the pits with tyre degradation putting him out of competitive running in the race. He would soon retire with engine failure.

Teammate Laffite was comfortably leading the race, until he too like Pironi began to suffer from a deflating tyre. Unlike Pironi however, he opted to stay out. This resulted in full on tyre blowout at Hawthorn Bend, Laffite spun off the circuit through the catchfencing and into the tyre barriers. Laffite was out, and once again Alan Jones and Williams inherited the lead due to Ligier misfortune.

With Jones leading, Piquet was trailing him in his Brabham with Reutemann a long way down in third. Derek Daly was doing well in fourth whilst behind him came Mario Andretti and Jean-Pierre Jarier.

However it wasn't long before Pironi had made his way past both Jarier and Andretti to move back into fifth place.

On lap 57, Mario Andretti pulled into the pits to retire with a gearbox failure. A disappointing result considering he was running in the points in fifth place. Watson then had to pit from seventh due to tyre wear. He exited behind Hector Rebaque's Brabham.

Pironi was lapping the fastest of all the driver's on track until he then began to slow with tyre troubles once again. Pironi's tyre then suddenly burst and Pironi had to pull off the circuit. Tyre troubles proving the downfall of the two Ligier cars in Britain.

Jones would go on to coast home to take the win, Piquet was second with the second Williams of Reutemann in third. Tyrrell did well to get points with Daly in fourth and Jarier in fifth. Prost managed to bring home one point for McLaren.

The full results for the 1980 British Grand Prix are outlined below: