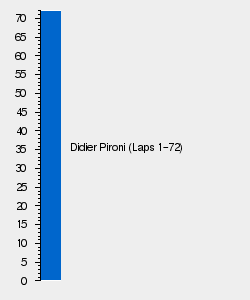 The 1980 Belgian Grand Prix saw French driver Didier Pironi take his maiden Formula One victory for the Ligier team. Rounding off the podium were the two Williams cars of Alan Jones and Carlos Reutemann

After a five week break in between the USA and Belgium, it was announced that Don Nichols, the owner of the Shadow had called it quits after eight years in Formula One and had sold the team to Teddy Yip's Theodore organisation. In the first five races the team had been only able to qualify once, it had been a disappointing final season for Shadow. Despite now being under Theodore ownership, the team retained the Shadow name for the remainder of the season and kept its driver line-up of Geoff Lees and Dave Kennedy.

Alain Prost was back racing with the McLaren team after missing the previous two events after breaking his wrist. Ensign also had to find a new driver following Clay Regazzoni's career ending crash in Long Beach. The team signed Tiff Needell as a replacement. Needell had previously signed as a race driver for the team in 1979, however failed to attain a superlicense due to a lack of experience. A season in British Formula One finally provided Needell the opportunity to race in Formula One as Regazzoni's replacement.

Belgium would also mark the first race without qualifying tyres. Formula One's tyre suppliers, Goodyear and Michelin had agreed to no longer produce the special compound qualifying tyres. Instead the team's would now have to use the same type of compound tyres in qualifying as they would during the race.

Below is the full entry list for the 1980 Belgian Grand Prix:

Qualifying for Belgium was extremely wet as for the first time in 1980, the full wet tyre compounds were getting some use. The battle for the pole position was highly intense with less than a second covering the top six. Williams, Ligier and Renault appeared to have the measure over the rest of the field, and the race lead seemed likely to be fought by these six cars. Alan Jones took pole ahead of Didier Pironi, Jacques Laffite, Carlos Reutemann, Jean-Pierre Jabouille and René Arnoux.

Unlike during qualifying, race day at Zolder was held in sunny and warm conditions. As the lights went green, Didier Pironi immediately took the lead from Alan Jones heading into the first corner. Bad luck struck Jean-Pierre Jabouille once again, the Renault driver suffering a clutch failure which saw him struggle to get away before retiring the next lap. The second lap saw Jochen Mass's Arrows spin into the catch fencing, forcing his retirement from the race.

Pironi began to pull away in the lead whilst Jones and Laffite began to create a gap to the trio of Reutemann, Arnoux and Piquet. Lap seven saw John Watson pull into the pits with mechanical trouble. The McLaren driver would spend several laps in the pits as his mechanics repaired his car, Watson would rejoin the race albeit several laps down.

Reutemann, Arnoux and Piquet held an intense battle for fourth place. On lap 17, Arnoux attempted to overtake Reutemann but succeeded in only spinning off the circuit. Arnoux dropped to tenth behind Piquet, Jean-Pierre Jarier, Gilles Villeneuve and Elio de Angelis. Arnoux then had to battle through the field in order to make his return to the front of the field.

On lap 32, Arnoux's comeback was further assisted when Nelson Piquet spun off the circuit and into retirement. At the front, Jacques Laffite was suffering from brake wear and was dropping back from Alan Jones and into the clutches of the second Williams of Carlos Reutemann.  Lap 38 saw Reutemann overtake Laffite, the following lap Laffite pitted to get his brakes fixed. This dropped him well out of the running for points.

Pironi took a dominant first Formula One win ahead of the two Williams cars of Alan Jones and Carlos Reutemann.