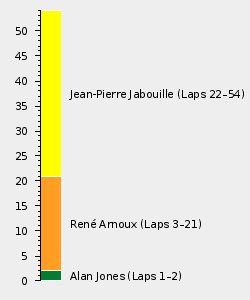 The 1980 Austrian Grand Prix was the tenth round of the 1980 Formula One Season. Jean-Pierre Jabouille in a Renault took his second grand prix victory ahead of the two Williams cars of Alan Jones and Carlos Reutemann. The race was also notable for the debut of Nigel Mansell for the Lotus team.

Heading into Austria, Alan Jones and Williams comfortably led the driver's and constructor's championships. Despite Jacques Laffite's win in Germany, the Ligier who were proving to be Williams's strongest rivals had not been consistent enough throughout the season to pose a serious threat to the Williams cars. The  Österreichring was the fastest circuit on the calendar, this would play to the advantage of the turbo-charged Renault cars of René Arnoux and Jean-Pierre Jabouille who were usually the fastest cars on the track at the fast circuits.

Lotus would enter a third car for the weekend, the team's test driver Nigel Mansell would make his Formula One debut in Austria. Mansell had been in the running for the second seat at Lotus pre-season, the seat went to Elio de Angelis however, Mansell had in 1979 broken his back during a Formula Three event and wasn't in the best physical condition prior to the start of the season. After a series of impressive tests, Mansell was given the go to race, it was rumoured Colin Chapman was evaluating him for a race seat alongside Elio de Angelis for 1981. After two disappointing seasons at Lotus following his world championship victory in 1978, Mario Andretti was becoming increasingly disillusioned with the Lotus team and was unlikely to stay on for the new season.

Below is the full entry list for the 1980 Austrian Grand Prix:

During the qualifying session, Jochen Mass in his Arrows had a nasty off, Mass speared off the circuit and into a field rolling his car multiple times. During the accident Mass had injured his neck meaning he would be unable to further participate in the weekend. Following Mass's crash, six drivers were awarded a fine of 30 000 Austrian schillings for ignoring red flags following Mass's accident.

Unsurprisingly, the Renault cars were the quickest cars on the track with Arnoux and Jabouille taking the first two grid slots with the Williams and Ligier cars lining up behind them.

Prior to the start of the race, the Lotus mechanics had overfuelled their debutant driver Nigel Mansells car, this meant the fuel had spilt onto Mansell's back whilst he was sitting in the car. Mansell could feel the fuel burning on his back and although the team asked if he would like to retire from the event, Mansell refused to quit despite sitting in a puddle of petrol and took his final grid placing in twenty fourth place.

The Renault cars made poor getaways off the line, René Arnoux lost the lead to Alan Jones whilst Jean-Pierre Jabouille dropped behind Jones, Bruno Giacomelli who had made a brilliant start from eighth on the grid and Didier Pironi. By the end of the first lap, Giacomelli had lost third place as Pironi and Jabouille had overtaken him once again. On the second lap, Jabouille was making up ground as he overtook Pironi's Ligier for third position.

On lap 12, Derek Daly had a terrifying moment when his Tyrrell suffered a brake failure whilst dicing with Keke Rosberg, Daly went flying off the circuit, smashing through a wooden fencing and ending up in a paddock outside of the circuit. Luckily the Tyrrell driver emerged unscathed.

Whilst enjoying a comfortable lead, Arnoux then began to suffer from severe tyre degradation and was forced into the pits for new tyres, ruining his race. Arnoux, already out of the running would have to pit for tyres another two times during the race. It would be an unfortunate result for him as in the final stages, Arnoux set a new lap record on lap 50 for the circuit despite being one lap down on the leaders.

In the mid-stage of the race, Reutemann had moved ahead of Giacomelli and when Piquet began to experience clutch problems, the Argentine took third as well. Piquet would continue to struggle and dropped behind Giacomelli and Jacques Laffite as well.  A strong drive from Giacomelli was brought to an end on lap 28 when he went out with suspension problems.

Lap 40 saw the debutant Mansell retire with engine failure. Mansell was barely able to walk as he stumbled out of his car, he had been sitting in a pool of petrol for nearly the entire race where he suffered first and second degree burns to his lower back and buttocks.

Jabouille, meanwhile had managed to establish a comfortable ten second lead over Jones in second place. However in the closing stages, like Arnoux before him the Renault began to suffer from tyre degradation. Lap after lap Jones began to edge closer and by the final lap Jones was on Jabouille's tail. Jabouille however was able to hang on to first by the skin of his teeth, the Renault driver taking the win by less than a second as the two cars crossed the finish line nearly neck to neck.

Jabouille was ecstatic, the Renault driver had suffered poor luck throughout the season, his car breaking down race after race. His Austrian win was remarkably not only his first win of the season but his first points of the season as well. Jones, although increasing his championship lead was more disgruntled. He felt that he could have taken the race win if his pit crew had kept him properly informed of Jabouille's issues where he would have applied more pressure at an earlier stage.

Retrieved from "https://f1.fandom.com/wiki/1980_Austrian_Grand_Prix?oldid=73501"
Community content is available under CC-BY-SA unless otherwise noted.