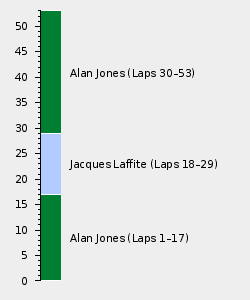 The 1980 Argentine Grand Prix was the first race of the 1980 season, it was won by the Williams driver Alan Jones ahead of Nelson Piquet and Keke Rosberg.

Jody Scheckter and Ferrari were the reigning World Champions heading into the start of the 1980 season. However although the champions, all eyes were on the Williams team and Alan Jones. Jones had dominated the second half of the season in 1979, poor reliability had been all that prevented him taking the title in the previous year. Despite Ferrari having a power advantage in the engine compared to most of its rivals who used the Ford Cosworth DFV unit, aerodynamics was where the team had lost out to Williams and the other rivals. Ferrari had a lot of work to do over the winter in order for their car to be as aerodynamically efficient as the Williams.

The ever improving turbo charged Renault team kept the same line-up as 1979 with René Arnoux and Jean-Pierre Jabouille piloting their cars.

McLaren had a dismal year in 1979, prompting change within the management in order to get them back to winning ways. McLaren had merged with Ron Dennis's Project Four Formula Two team, meaning for joint leadership in the team between Dennis and Teddy Mayer. Dennis had recruited successful IndyCar designer John Barnard to join the team in 1980. John Watson remained as lead driver whilst he was joined by debutant, Alain Prost, the reigning Formula 3 champion.

Brabham had also had a poor 1979, however it maintained its line-up of Nelson Piquet and Ricardo Zunino heading into the new season. The team no longer using the Alfa Romeo engines following the works team entering F1 at the end of the season. Brabham hoping the reliable Ford Cosworth engine would improve their fortunes in 1980. Arrows also kept its 1979 line-up of Riccardo Patrese and Jochen Mass.

Shadow had a brand new line-up for 1980, bringing two new driver's Stefan Johansson and Dave Kennedy into the team for their first season in Formula One. Template:ATS-CON had expanded to two drivers for 1980, Jan Lammers joining the team alongside Marc Surer.

Fittipaldi continued to run Emerson Fittipaldi alongside new teammate Keke Rosberg. Ensign saw Clay Regazzoni return to the team as their one and only driver.

Template:Alfa-Romeo-CON had competed in Formula One sporadically throughout 1979. 1980 would see them return to the grid full time as a works team for the first time since 1951. The team signed veteran driver Patrick Depailler to lead the second incarnation of their team in 1980.

There was one new team to the grid for 1980, the Osella team. After success in Formula Two, the team graduated into Formula One for 1980. The team signed Eddie Cheever its former Formula Two driver in 1979.

The full entry list for the 1980 Argentine Grand Prix is outlined below:

The full qualifying results for the 1980 Argentine Grand Prix are outlined below:

Before the race began, there was significant debate amongst the driver's whether the race should be held. In the hot sunshine, the tarmac was disintegrating something that was being noticed by driver's throughout practice. Ultimately, although the track was notably coming apart in places creating a lot of marbles and gravel off the racing line. This made the track extremely slippery and difficult, ultimately having an adverse effect on the race later in the day. René Arnoux failed to take his position on the grid, following suspension issue meaning he would start the race from the pit-lane. Although the mechanics were able to repair his car, Arnoux would start the race some places down on the rest of the field.

Alan Jones would maintain his lead ahead of the two Ligier cars of Jacques Laffite and Didier Pironi. Nelson Piquet was then able to overtake Pironi going into turn three. Gilles Villeneuve who had made a strong start to climb to fifth from eighth, then spun off at turn three the moment Piquet overtook Pironi.

Pironi then lost another two places to Mario Andretti's Lotus and Carlos Reutemann's Williams. It then became evident why Pironi was losing pace, his engine had blown forcing him out of the race. The end of the first lap also saw Jean-Pierre Jarier retire following collision damage on the first lap.  After his troublesome Renault struggled to get out of the pits due to suspension issues, the second lap saw René Arnoux  spear off the circuit when the suspension failed sending him into the barriers.

Riccardo Patrese and Elio de Angelis then had a coming together, the incident put the Lotus driver of De Angelis out of the race whilst Patrese had to pit for repairs.

The end of the second lap saw Mario Andretti coming into the pits, for a very early first pit-stop.  Lap six saw Jacques Laffite reclaim second position from Piquet's Brabham. However only a few corners later, Piquet retook second position as Carlos Reutemann closed in on the pair. One lap later Laffite went back into second position, the Ligier driver quicker in the corners however Piquet's Brabham held the straight line speed allowing him to close up on Laffite in the long straights of the circuit.

Reutemann then took a dive around the outside of Piquet going into turn two, however ran wide and onto the grass losing time to the two cars ahead. Reutemann's car had caught a lot of dust and dirt in his radiators forcing him to come into the pits to allow his mechanics to clean it out.

Behind the top four, Villeneuve had managed to regain the positions he had lost at the start running in fifth ahead of Ferrari teammate Jody Scheckter and Keke Rosberg's Fittipaldi who had done well to climb to seventh from thirteenth on the grid.

Lap twelve saw Reutemann retire from fourth with a blown engine. Reutemann sat down next to his car with his head in his hand, distraught at retiring from his home grand prix.

Out front, Reutemann's teammate Alan Jones had got a plastic bag stuck in his radiators forcing him to come into the pits on lap 17 to clear out the bag. Jones rejoined the race in fourth place behind Villeneuve's Ferrari. .

Meanwhile Villeneuve had been closing in on Piquet's second position. Villeneuve made a small mistake whilst chasing down the Brabham allowing Jones's Williams to close onto the rear of the Ferrari driver. Jones was then able to overtake Villeneuve going into turn two, however only a few corners later Jones ran wide onto the marbles spinning his car and allowing Villeneuve back through into third position. However only a couple of laps later, Villeneuve made a mistake going off the circuit and allowing Jones back into third.

Jones, the fastest car on track then caught and overtook Piquet for second position on track. Piquet losing ground then lost a position to Gilles Villeneuve. Jones then went wide again onto the dusty part of the circuit, losing time and allowing Villeneuve and Piquet to close.

Lap 27 saw Patrese, who had climbed back up to sixth position after his crash earlier in the race retire with engine failure. A couple of laps later, Jones had reclaimed the lead from Laffitte going into turn four.

Villeneuve then managed to close onto the rear of Laffitte, however Villeneuve's Ferrari did not have the straight line speed to catch Laffite down the long straights of the circuit. Luckily for Villeneuve, Laffite suffered an engine failure on lap 30 allowing Villeneuve into second position.

Villeneuve who had begun to put pressure on Jones then suffered a steering failure sending him straight on in a corner, through the catch fencing and slamming into the barriers. Ten laps later, Jody Scheckter who was running in third place suffered an engine failure which had allowed Keke Rosberg in the Fittipaldi to move into third position. Rosberg had been battling with Derek Daly's Tyrrell who was running well after starting twenty second on the grid.

Jones therefore took a dominant win, 24 seconds ahead of Piquet in second place. Rosberg took his first podium finish in Formula One, his team's first since 1978. Daly took a commendable fourth ahead of Bruno Giacomelli who claimed Alfa Romeo's first points upon their return to Formula One and Alain Prost's McLaren who had scored points on his F1 debut.

The full results for the 1980 Argentine Grand Prix are outlined below:

Retrieved from "https://f1.fandom.com/wiki/1980_Argentine_Grand_Prix?oldid=86816"
Community content is available under CC-BY-SA unless otherwise noted.