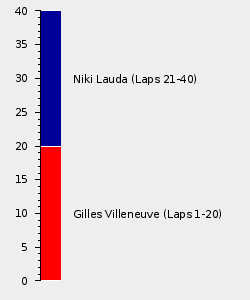 The I Gran Premio di Dino Ferrari, otherwise known as the 1979 Dino Ferrari Grand Prix, was a non-Championship FIA Formula One race, staged at the Autodromo Dino Ferrari on the 16 September 1979.[1] The race would be the last for Niki Lauda with Brabham, with the Austrian double World Champion signing off with victory.[1]

Qualifying would see the two Ferraris duel for pole position a week after they had swept to victory in Monza, with Gilles Villeneuve emerging ahead by 0.33s.[1] Newly crowned Champion Jody Scheckter therefore started second, while Lauda would share the second row with Carlos Reutemann.[1]

It was grid order as the field pulled away at the start, with Villeneuve sweeping into Tamburello ahead of Scheckter, while Reutemann kept Lauda at bay.[1] Those four proceeded to pull clear over the opening tour, leaving Riccardo Patrese to lead the rest of the field in his Arrows.[1]

The top four would run nose-to-tail throughout the early stages, until Reutemann's Lotus picked up a bad vibration.[1] Lauda duly took up the anti-Ferrari charge as the Argentine dropped back, and would soon elbow his way past Scheckter and into second as the South African hit tyre trouble.[1]

Villeneuve was also suffering with his Michelin tyres, although he was far more robust in his defence, leading to an epic duel for the lead.[1] They would fight for three laps until Villeneuve finally made a mistake, punting the Brabham up the back after misjudging the amount of grip he had.[1]

Miraculously Lauda would scramble through without damage or major loss of time, while Villeneuve had to limp back to the pits with his nose out of joint.[1] He rejoined in tenth and a lap down, but soon came charging back through the field to challenge for the top six late on.[1]

With that the race was run, with Lauda eventually limping home with a broken exhaust some seven seconds clear of Reutemann.[1] Indeed, the Argentine had been able to sneak ahead of Scheckter when the South African hit tyre trouble, and only the shortened 40 lap race distance prevented Patrese challenging for third late on.[1] Jean-Pierre Jarier was next ahead of Keke Rosberg, while Villeneuve ultimately had to settle for seventh having set a new lap record.[1]

Formula One reached an interesting impasse during the late 1970s surrounding its oldest events, with the loss of several traditional venues across the decade, most notably the Nürburgring, prompting a lot of either investment or speculation.[1] In 1979 the Autodromo Dino Ferrari near Imola, Italy, made its bid to replace one such venue, intending to take the Italian Grand Prix from its traditional home of Monza.[1] The FIA had given initial approval for the change to be made for the 1980 season, although the Imola circuit had to host an F1 or equivalent race to prove it met the organisations increasingly effective safety standards.[1]

The I Gran Premio di Dino Ferrari was the result of the FIA's demand, which would see F1 equipment run competitively at the Imola circuit for the first time since it was modified in 1974.[1] The circuit itself was a mix of sweeping bends and tight, narrow, chicanes, which had been added to the old circuit to slow cars down.[1] Otherwise the circuit was unchanged from its only other F1 race, staged in 1963 and won by Jim Clark in a Lotus-Climax.[1]

In terms of an entry list sixteen drivers would be given the chance to compete, with over half the field heralding from Italy.[1] Indeed, Alfa Romeo were keen to impress, and so sent both Vittorio Brambilla and Bruno Giacomelli to the race with new cars, while the highly rated Riccardo Patrese convinced Arrows to let him race the British squad's spare A1B.[1] Shadow, meanwhile, gave reserve driver to Beppe Gabbiani a run-out alongside Elio de Angelis, Arturo Merzario brought his self-built creation along, while Giacomo Agostini entered two ex-factory Williams FW06s for himself and Carlo "Gimax" Franchi.[1]

However, the undoubted fan favourites for victory were the two Ferrari factory drivers with Gilles Villeneuve and Jody Scheckter both using the cars that had swept to a one-two victory in Monza a week earlier.[1] Furthermore, with neither the factory Williams squad, Ligier or the Renault team bothering to compete, the Scuderia had an almost clean run to victory on pace alone.[1] Indeed, only the increasing tension between Villeneuve and Scheckter looked likely to threaten their likely one-two, with Villeneuve free to race the new World Champion for the rest of the season.[1]

Other regulars from the 1979 F1 circus included a lone Tyrrell for Jean-Pierre Jarier, as well as a single Lotus for Carlos Reutemann.[1] Keke Rosberg also made the trip with his Wolf, Niki Lauda would give his Alfa engined Brabham a final run, while Patrick Tambay was sent to represent McLaren, albeit in the un-competitive M28.[1] Completing the entry would be Alex Ribeiro, who took over Emerson Fittipaldi's #14 Fittipaldi as the Brazilian squad assessed whether they should run a second car in the final two rounds in North America.[1]

The full entry list for the 1979 Dino Ferrari Grand Prix is outlined below:

Qualifying for the inaugural Dino Ferrari Grand Prix was staged across a single session after practice on the Saturday before the race, with all sixteen entries set to qualify for the grid.[1] Conditions were ideal for the single two hour session, with no reference time for drivers to aim for, being the first F1 event to take place at the circuit for sixteen years.[1]

Qualifying would, ultimately, be dominated by the two Ferraris, with Gilles Villeneuve and Jody Scheckter exchanging fastest times throughout the session.[1] Ultimately, it was Villeneuve who emerged as the quickest, dipping into the 1:32.00s with a 1:32.91 to claim pole towards the end of the day, with Scheckter unable to respond.[1] Regardless, the South African World Champion would start from a very safe second, with only one other driver in the 1:33.00s.[1]

That driver was ex-Ferrari racer Carlos Reutemann in the lone Lotus, who fended off tifosi traitor Niki Lauda by almost a full second.[1] They were followed by Riccardo Patrese in the Arrows, before the first of the Alfa Romeo factory cars appeared in the form of Vittorio Brambilla.[1] Elsewhere Patrick Tambay failed to set a time as his McLaren had some major dramas, while Beppe Gabbiani was forced to withdraw entirely after destroying two Ford Cosworth engines in his Shadow.[1]

The full qualifying results for the 1979 Dino Ferrari Grand Prix are outlined below:

The full results for the 1979 Dino Ferrari Grand Prix are outlined below:

Retrieved from "https://f1.fandom.com/wiki/1979_Dino_Ferrari_Grand_Prix?oldid=86599"
Community content is available under CC-BY-SA unless otherwise noted.