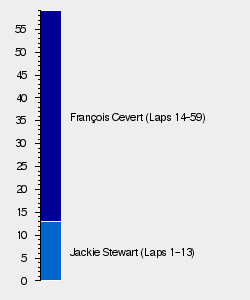 The 1971 United States Grand Prix, after the cancellation of the Mexican Grand Prix, was the final race of the season. With the large prize fund, the race attracted a very strong entry. Since the 1970 race, the circuit had undergone a major rebuilding. The track had been resurfaced and widened to a uniform 36 feet (11m) all around, and guard rail now lined the entire track. The pits (along with the start/finish line) had been moved, and more than doubled in size, with a four hundred foot long garage immediately behind. There was a new press building, new grandstands and a new section of track to the southwest, adding almost a mile to the length. Many were now describing the track as the finest road circuit in North America.

In the race itself, Tyrrell driver François Cevert scored his first (and, tragically, his only) Formula One victory.

The full entry list for the 1971 United States Grand Prix is outlined below:

* = Position of driver among all 32 entrants.