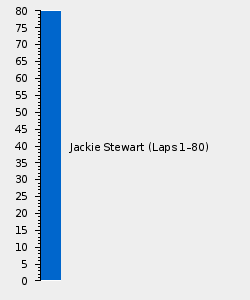 The 1971 Monaco Grand Prix, formally known as the XXIXe Grand Prix Automobile de Monaco, was held on the 23rd of May. It was the third race of the season, and the 200th Grand Prix held since the World Championship was created in 1950. Jackie Stewart scored a Grand Chelem in his Tyrrell-Ford, leading every lap from pole, and setting the fastest lap. Ronnie Peterson proved that he was a future star, driving a good race to second in his March-Ford, and Jacky Ickx finished third in a Ferrari.

Film director Roman Polanski shadowed Stewart through the entire time he was in Monaco, chronicling the result in the documentary film Weekend of a Champion.

The full entry list for the 1971 Monaco Grand Prix is outlined below:

Retrieved from "https://f1.fandom.com/wiki/1971_Monaco_Grand_Prix?oldid=88380"
Community content is available under CC-BY-SA unless otherwise noted.