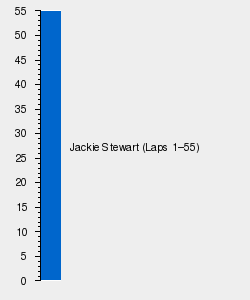 The 1971 French Grand Prix was the fifth race of the 1971 Formula One season, and was held at the new Circuit Paul Ricard on 4 July 1971. Despite Ferrari being heavy favorites to win, Jackie Stewart scored a Grand Chelem, and teammate François Cevert made it a Tyrrell 1-2.

After two years at the Charade Circuit, near Clermont-Ferrand, the race was held at the brand-new Circuit Paul Ricard, near Marseille. Wide and flat, the circuit was criticized by journalists, but the safety features and modern facilities made it popular with drivers and teams. The 1.9km-long Mistral straight meant that a premium would be placed on horsepower and aerodynamics. The track had been used extensively for off-season testing, but no one had ever raced here in mid-summer, so the very warm and breezy conditions caught some teams off guard.

The full entry list for the 1971 French Grand Prix is outlined below: