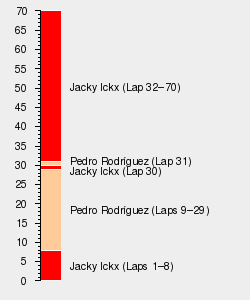 The 1971 Dutch Grand Prix was the fourth race of the season, and was held on June 20. Because of the cancellation of the Belgian Grand Prix, there had been a four week gap after Monaco. The track was battered by heavy rain and gusty winds at different times over the weekend, and the race was dominated by 12-cylinder cars with Firestone rain tires. Jacky Ickx captured the pole, led most of the race and set the fastest lap on his way to victory.

The full entry list for the 1971 Dutch Grand Prix is outlined below:

Before official practice started on Friday, there had been an unofficial session at the track on Wednesday. The only teams to take part were Ferrari, Lotus and March.

Even though Dave Charlton was listed in place of Emerson Fittipaldi on the entry sheet, it was Dave Walker who was in fact the higher placed driver in the team. This was made obvious on Friday morning when, concerned that the rebuilt turbine for the 56B might not arrive, Walker took out Charlton's 72C. Who soon spun the car, wrecking the rear suspension. As the team did not have enough spare parts, Charlton's weekend was over without turning a lap. Fastest in the morning was Clay Regazzoni with a 1:17.98, then an oil pipe came loose, and dropped oil over roughly half the circuit. After practice restarted, Regazzoni and Mario Andretti tried out new 17 inch rims for the rear tires. Both cars soon suffered rapid deflation of a rear tire. Firestone determined that the tires were centrifuging off of the rims. The team went back to the older rims, and because of damage to his B2, Andretti used one of the spare 312Bs for the rest of the weekend.

Friday afternoon's practice was alternately wet and dry, with setting good times requiring a bit of luck. Saturday morning featured heavy rain, but the turbine for Walker's Lotus had arrived, and the team worked all night to get it installed. Jackie Stewart suffered a blown engine in 003, which meant he was unable to try out wet track settings. After lunch, the track had dried out, but the cars were fighting a headwind down the main straight, so the grid was mostly based on Friday times except for a few cars at the back of the grid.