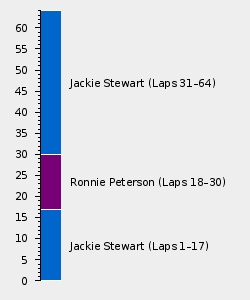 The 1971 Canadian Grand Prix was the tenth race of the 1971 Formula One season, and was held at Mosport Park on September 19, 1971. Jackie Stewart won the race, his sixth win of the season, after a tough battle with Ronnie Peterson. The race was run in wet conditions, and increasing fog caused the race to be halted after 64 of 80 scheduled laps.

The full entry list for the 1971 Canadian Grand Prix is outlined below:

24 cars would be allowed to start, but 27 were entered, which meant three would leave disappointed.

Even though Henri Pescarolo was the slowest qualifier, his spot on the grid had been guaranteed by the organizers. So the three DNQs were Barber, Craft and Lovely.

After the results of qualifying were posted, the Ecurie Evergreen team packed up and headed towards Watkins Glen, about a five hour drive. But during the untimed session on race morning, Pescarolo hit a puddle and slid into the guard rail. The car was repairable, but the driver had several minor injuries that, added together, meant that he could not drive that afternoon. Barber was in the race. When the cars set out on reconnaissance laps before the race, Ganley lost control and damaged his BRM. So he was out and Lovely was in.

Retrieved from "https://f1.fandom.com/wiki/1971_Canadian_Grand_Prix?oldid=77741"
Community content is available under CC-BY-SA unless otherwise noted.