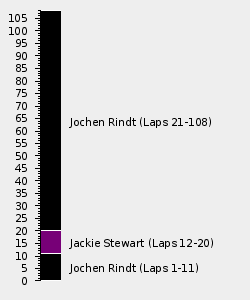 The 1969 United States Grand Prix was the 10th round of the 1969 Formula One Season, held at Watkins Glen Grand Prix Circuit on October 5. Jochen Rindt, driving a Lotus-Ford, won his first career Grand Prix. Piers Courage was second in a Brabham-Ford, and John Surtees was third in a BRM.

As Jackie Stewart and Matra had clinched the championships at Monza, most teams were focused on experimentation for 1970, and the prize money awarded. Which was a total of $206,000, including $50,000 for the winner. Sometimes the preparations for 1970 had to be done carefully, as a larger than usual number of the regular drivers were changing teams after the season.

In addition, a rumor was going around that the track was looking towards a major upgrade of amenities, safety features and spectator comfort. This was later proven true when the track was almost completely rebuilt in the spring and summer of 1971.

The entry was identical to Mosport, with the following exceptions:

The full entry list for the 1969 United States Grand Prix is outlined below:

Practice started on Friday with cold temperatures and heavy rain, not unheard of in upstate New York in the fall. Most of the drivers concentrated on wet weather settings and tire testing. In particular, Dunlop had a new wet weather tire, the CR88, featuring "aquajets", designed to provide improved grip in the wet. Even so, the fastest time was recorded by Jack Brabham, with a 1:13.84 (more than 10 seconds slower than an expected dry time) on Goodyears. Jean-Pierre Beltoise was second fastest on a Dunlop, followed by Jacky Ickx on Goodyears, then Jackie Stewart and Piers Courage on Dunlops. The fastest Firestone driver was Graham Hill in eighth place.

The pair of four wheel drive cars were a disappointment in these conditions, where they were expected to have an advantage. Stewart and Johnny Servoz-Gavin both took out the Matra MS84, and recorded 1:16.94 and 1:19.48, respectively. And Mario Andretti in the Lotus 63 could only manage a 1:19.60.

On Saturday, the rain let up, but the cold weather did not. It was not until the afternoon when drivers were able to get past the 1968 lap record (1:05.22). Jo Siffert was the first under that mark, but Ickx then cranked out a 1:04.32. On the following lap, Ickx' rear wing broke, and the car spun back end first into a guard rail, ending his practice. Even so, it looked like his time might hold up for pole (and a $1,000 prize), but in the last half hour things got entertaining. Several drivers bettered each other, until Jochen Rindt, who had been plagued with a misfire most of the practice, rattled off a 1:03.62. At almost the exact time, Denny Hulme recorded a 1:03.65, and that was the front row. Stewart and Bruce McLaren would be on the second row, and poor Ickx dropped all the way to eighth.

McLaren went into the race feeling good about their chances, with Denny Hulme 2nd and Bruce McLaren 4th on the grid. That all went horribly wrong during the three warmup laps before the race. McLaren's engine exploded on the back straight on the first warmup lap, ending his race before it started, and about the time he had hiked back to the pits, Hulme came in with serious shift linkage problems. Even though the start was delayed, due to some over-zealous fans, Hulme's problem could not be repaired, and the team pushed him back out to the grid and hoped for the best.

When the flag dropped, Jochen Rindt shot into the lead. But from second position, Hulme was very slow off of the line. Even with the gap left for McLaren's car, there was a bit of a logjam behind him. Jack Brabham tried to dodge Hulme's car, but in doing so he bumped Mario Andretti into the countryside. Andretti came around last at the end of the lap, and soon retired with broken suspension.

Meanwhile, at the front, Rindt was holding the lead just ahead of Jackie Stewart and Graham Hill. Hill was soon passed by Jo Siffert, Jean-Pierre Beltoise and Piers Courage but inherited fifth again when Siffert's fuel metering unit broke. Both Hulme and Beltoise made pit stops with shift linkage problems. Hill was back up to fourth, but was soon passed again, this time by Jacky Ickx, with Brabham sitting right on his tail, with John Surtees and Pedro Rodríguez not far behind.

At the front, Stewart had managed to get past Rindt for a few laps, with Courage more than 20 seconds behind in third. On lap 21, Rindt took the lead again, and immediately started to pull away, as Stewart's car started trailing blue smoke. An oil seal had broken, and the oil was leaking onto an exhaust pipe. On lap 36, Stewart had no choice but to pull into the pits to retire, joining recent retirees Jackie Oliver (blown engine) and Pete Lovely (broken driveshaft). This left Rindt with a 40 second lead over what had suddenly become a pitched battle for second between the three Brabham cars. Courage had backed off slightly, due to a wheel vibration, around the same time that Brabham had passed Hill, and started pressuring Ickx. Ickx got past Courage for a few laps, but Courage's vibration went away after a few laps, and was able to repass Ickx. After Rindt had lapped team leader Hill on lap 33 and Surtees on lap 38, this battle comprised the only other cars on the lead lap. Rodríguez' suspension had become slightly deranged in the first lap fracas, and after a stop for new tires, he rejoined the race near the back of the field. At this point the race settled down a bit, save for Hulme finally giving up the battle on lap 53. Rindt was content to keep his lead a bit above 40 seconds from the battling Brabhams, and Courage was doing a brilliant job of holding off Ickx and Brabham, even though there was rarely an entire second between them. The battle finally let up when Ickx's engine went sour on lap 78 and Brabham backed off a little bit when he fell out of the slipstream. Around this time both Beltoise and George Eaton had retired with engine problems.

Hill had managed to make it back to fourth place, purely by attrition, but that ended when he spun at the loop on lap 89. The car got into some dirt and stalled, and Hill had to undue his seat belts and get out to push the car back to the pavement. He restarted the car and took off in what was now sixth place, but without the belts fastened, as the car did not have enough room for the driver to secure them on his own. After another lap, he had decided to stop at the pits and have the belts fastened, but before he could reach the pits the car went off again at the loop. The cause was likely a deflating tire, and this time the accident was much more severe. After a half-spin, the car straightened out and went directly into a dirt bank, then flipped over the bank. Hill was thrown from the car, and in the process suffered multiple fractures to both legs. The marshals were astonished that he had survived the crash, and he was quickly stabilized, and transferred to hospitals in Watkins Glen, then Syracuse, and finally to where a team of specialists could operate in New York City. It was almost three weeks before he could be transferred to England. His comment to the marshals was, "Tell my wife I won't be dancing for a couple of weeks." His rehabilitation would actually last the rest of his life.

While Hill's rescue was underway, Brabham had made a pit stop for fuel, as his fuel pump was not picking up everything in the tank. He rejoined the race in fourth, two laps down, but not far behind Surtees. Rindt ran out the string of laps for his first Formula One victory, and his joy in the cockpit was obvious to all. Courage was almost as happy when he came by 47 seconds later, and Surtees held off a furiously charging Brabham for third, two laps down. Rodríguez (fifth place, seven laps down), Silvio Moser (sixth, 10 laps down) and Servoz-Gavin (16 laps down and not classified) were the only other cars running. But the celebrations were muted a bit, when the severity of Hill's injuries became known.

With Jackie Stewart already declared Champion it was the fight for second that had taken precedence in the US, with victory propelling Jochen Rindt right into the fight. The Austrian racer would head to the season finale in fourth, nine points behind second placed Jacky Ickx, with Bruce McLaren in between. Graham Hill and Jean-Pierre Beltoise were out of the fight in fifth and sixth, as seventeen drivers now had their names on the scorers list.

Matra-Ford Cosworth had already won the Intercontinental Cup for Manufacturers back in Monza, meaning the fight for second between Lotus-Ford Cosworth and Brabham-Ford Cosworth was the only significant battle for prize money. Rindt's victory had pushed Team Lotus up into second, although their advantage over Brabham was just two points heading to Mexico. Elsewhere, McLaren-Ford Cosworth were out of the fight but secure in fourth, Ferrari only had seven points in a miserable fifth, while BRM rounded out the scorers with six.

References:
Retrieved from "https://f1.fandom.com/wiki/1969_United_States_Grand_Prix?oldid=65513"
Community content is available under CC-BY-SA unless otherwise noted.