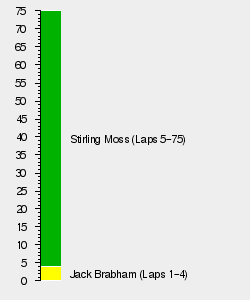 The 1960 United States Grand Prix was the third running of the United States Grand Prix, and the season finale for the 1960 Formula One World Championship.[1] Held at Riverside International Raceway in California, the race was considered a flop, as Jack Brabham had already secured the title, while Ferrari opted not to attend at all.[2]

Despite a general lack of interest, and the resulting financial failure meaning Riverside would never host a Formula One Grand Prix again, Stirling Moss claimed pole and victory as he continued to recover from injuries sustained earlier in the year.[1] Innes Ireland and Bruce McLaren completed the podium, after Brabham overfuelled his car, which caused the Climax engine to burn fuel in the exhaust, with Brabham stopping early to investigate the issue.[2]

Riverside had already hosted one "United States Grand Prix" in 1958, a sportscar race attended by over 70,000 people.[2] Alec Ulmann, who had organised the 1959 United States Grand Prix at Sebring, which had failed to strike a chord with F1, arranged for the California based circuit to host the 1960 edition of the race.[3] The FIA were more than happy to oblige, although the American attitude to European racing was less than spectacular, with the Los Angeles Times opting not to advertise the F1 race as it had for the sportscar event.[2]

Furthermore, attendance figures were in doubt after the title was decided in Portugal, where Jack Brabham had moved seven points clear, a gap his rivals could not overcome when dropped scores were applied.[2] The long haul to America also saw some teams opt to ignore the race due to expense and time, the most notable being Scuderia Ferrari.[2] Enzo Ferrari decided that his resources would be better spent on developing cars for the new season, with the team's drivers allowed to attend the race with different equipment.[1]

Phil Hill secured a drive with the Yeoman Credit Racing team, otherwise known as BRP, joining former team mate Tony Brooks with the American taking the teams' first car.[1] Wolfgang von Trips, meanwhile, was able to take on one of the Scuderia Centro Sud cars for the race, with both of the Ferrari drivers hoping to secure their positions in the Championship.[1] Elsewhere, Jim Hall made his début in a non-works Lotus 18, while Ron Flockhart made another rare appearance, taking over the fourth works Cooper machine.[1]

Although Brabham and Bruce McLaren could not be displaced from their positions at the top of the table, the rest of the prize money was still up for grabs. Phil Hill currently sat in third, three ahead of Innes Ireland, while Stirling Moss was also in with a shout of finishing the top three, despite missing part of the early season. Olivier Gendebein and Wolfgang von Trips were also able to take the position, although they would be outsiders.

The works Cooper team were already Champions of the Formula One Manufacturers' Championship, while Lotus and Ferrari were also secure in second and third. Although the top three was decided, the lack of the scarlet cars meant that fourth remained up for grabs, with BRM currently heading the chase with eight.

The full entry list for the 1960 United States Grand Prix is outlined below:

A small crowd gathered around Riverside to witness the combined practice and qualification sessions for the Grand Prix, held in dry, warm conditions.[3] Several drivers were full of praise for the new Grand Prix venue, comparing it to firm favourite Zandvoort, while home town racer Dan Gurney was one of the favourites for pole, having raced at the circuit in several times previously.[2]

Qualifying proved to be a battle of Cooper and Team Lotus, as Stirling Moss and Jack Brabham lead the charge for pole.[2] Ultimately, it was the Lotus 18 of Moss that would start on pole, the Brit outhussling Brabham's works Cooper by six tenths of a second.[2] Joining them on the three car front row was Gurney, who pushed his BRM to third to be the only other driver within a second of Moss, while team mate Jo Bonnier also looked strong in fourth.

The back of the field was largely populated by the local/American based drivers, with twelve seconds covering Moss on pole to Ian Burgess in 23rd (Walt Hansgen having withdrawn when his car failed to arrive). That said, one of the strugglers, given his record over the season, was Phil Hill, who was shocked by the difference between his race winning Ferrari in Monza, and the year old Cooper he obtained for the US race.[3] Wolfgang von Trips also saw himself down the order, although his car was both older and using an older, Maserati built engine.

The full qualifying results for the 1960 United States Grand Prix are outlined below:

A warm late November afternoon greeted the paddock on the 20th of November, with track temperatures hitting 25C before the start.[3] Yet, there were concerns when the attendance figure only hit 25,000 as the start time approached, with fears that the lack of advertising for the race would cause problems proved to be the case.[2]

That said, the few spectators that did arrive to watch the race would be well entertained in the opening stages, as the Grand Prix cars were thrown around the circuit. Best off the line was Jack Brabham, immediately launching into the lead of the race, while home hero Dan Gurney slotted into second and put pressure onto the Australian from the outset.[2] Stirling Moss ended up in third and was still pressuring the leading two, and was back past Gurney before the end of the first lap. At the back, meanwhile, Phil Hill and Olivier Gendebien both stalled on the grid but got back into the race.[3]

There were numerous dramas early on, with John Surtees spinning his Lotus 18 on lap four, which was just clipped by team mate Jim Clark, although Clark was able to continue.[3] Brabham, meanwhile, was throwing flames from his Climax engine, something which the Australian opted to have investigated after five laps, handing the lead to Moss.[2] As it turned out, the Cooper team had opted to completely fill the tank on the Australian's car, after he dropped out of the previous US Grand Prix due to a lack of fuel.[2] The over-fuelled car was then dumping fuel directly into the exhausts, throwing flames out the back, although the engineers could not determine the issue until the car had burned through a fair amount of fuel.[2]

The early and lengthy stop dropped Brabham from the leading pack, and the Australian would have to produce a recovery drive to score at all.[2] Moss, meanwhile, was dropping Gurney as the American fended off team mate Jo Bonnier to establish himself in second.[3] That was, until the BRM of Gurney began to overheat, causing a plug failure that put the American out, with Innes Ireland promoted to third.[2] From here the race began to calm, with technical issues being the main centre of attention.

Brian Naylor and Ian Burgess were the next to drop out with mechanical failures, while Phil Hill, running in fourth after his start issues, spun and lost ground.[3] Graham Hill then retired with a gearbox failure while running in the top ten, promoting Brabham into the points, before Bonnier fell to Ireland, the Swede beginning to suffer from the same issue as team mate Gurney.[3] Bonnier's BRM seemed to be surviving, however, as Brabham moved into the points with a string of strong laps.

Running up with the works cars at the front of the field was débutante Jim Hall, whose Lotus 18 was running within a lap of leader Moss in fourth.[3] He proved resistant to Hill and later Brabham's attempts to get by after Bonnier slipped down the order, while Bruce McLaren could only gain a small amount of time over the American each lap ahead in third.[3] The race was slowly coming to a conclusion when Hill set fastest lap, with Brabham now challenging Hall after taking the ailing Bonnier.

With Moss in total command, Ireland an isolated second and McLaren the only other driver on the lead lap in third, the attention was on the battle for fourth, although it was to be decided by mechanics rather than ability.[3] Brabham was reeling in Hall but was expected to struggle to get by the American, until the privately entered Lotus ground to a halt with a transmission failure with just two laps to go, with Hall managing to push his car to the line.[3] Bonnier, meanwhile, was just hanging on to the final points on offer in fifth, although Hill was still trying to catch him.

Unsurprisingly, it was Moss who claimed the final victory of the 2.5 litre era, taking him to third in the Championship and seeing him end on fourteen victories in the era, just one behind the legendary Juan Manuel Fangio.[3] Ireland and McLaren were comfortably on the podium, over thirty seconds separating them, while Brabham completed the final race of the season in fourth.[3] Hill, however, would have to settle with the point for fastest lap in his vain defence of third in the Championship, with Bonnier just holding on for fifth and two points.[3]

The financial failure that was the Riverside edition of the United States Grand Prix saw prize money delayed after the race, although winner Moss did receive his $7,500 prize, paid directly by Alec Ulmann.[3] Ulmann's American dream was seemingly done from that point, although he did succeed in paying the teams after a few months delay, while Watkins Glen picked up the rights to the US Grand Prix for 1961.[3]

The full results for the 1960 United States Grand Prix are outlined below:

Jack Brabham was finally confirmed as the World Champion for the second successive season having secured the title in Portugal, while Bruce McLaren was already safe in second place. Stirling Moss, meanwhile, climbed to third with his victory, as he swapped places with Phil Hill, Innes Ireland remaining inbetween. The order remained unchanged until the tail end of the top 20, where Jo Bonnier climbed five places to break into the top 20.

Like the Drivers' Championship, the Constructors was largely done and dusted before the weekend, with Cooper-Climax confimed as Champions for the second year in a row. Lotus-Climax ended the season in second, ahead of Ferrari who missed the US races. Cooper-Maserati and Cooper-Ferrari run machinery ended the season tied on three points, both beaten to fourth by BRM, while Porsche ended the year with a solitary point.