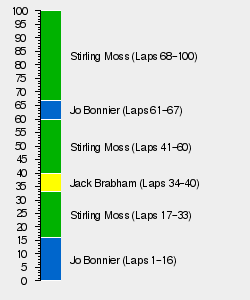 The 1960 Monaco Grand Prix was the second race of the 1960 season, and was held on May 29. It was won by Stirling Moss in a privateer Lotus-Climax, who was one of only four cars running competitively at the end of an eventful race. Bruce McLaren in a Cooper-Climax finished second, ahead of Phil Hill in a Ferrari. Several previously retired cars ran very slow laps near the race's end, so they could be driven (or pushed!) over the finish line after Moss had completed the race distance.