This article is a stub. You can help the Formula One Wiki by expanding it. 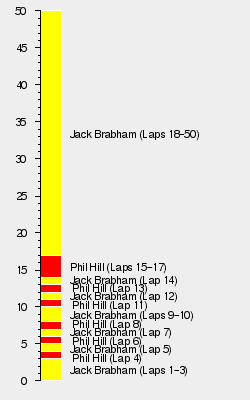 The 1960 French Grand Prix was the sixth race of the 1960 Formula One Season, held on July 3. The race was won by Jack Brabham in a Cooper-Climax, after a battle with Ferrari driver Phil Hill ended when Hill suffered a transmission failure. Second and third places went to Olivier Gendebien and Bruce McLaren, also in Coopers.

The full entry list for the 1960 French Grand Prix is outlined below:

The full qualifying results for the 1960 French Grand Prix are outlined below:

Retrieved from "https://f1.fandom.com/wiki/1960_French_Grand_Prix?oldid=83839"
Community content is available under CC-BY-SA unless otherwise noted.