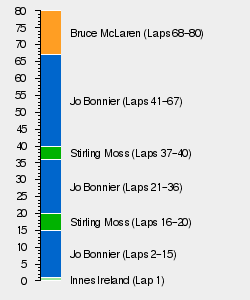 The 1960 Argentine Grand Prix, officially known as the VII Gran Premio de la Republica Argentina, was the opening round of the 1960 Formula 1 Season along with the first race of the 1960s. It marked the return of the Grand Prix to the Formula 1 calendar after a one year hiatus, and was the last race held on the orginal layout.

The race was won by Bruce McLaren for Cooper, with Cliff Allison in second for Ferrari. Poleman Stirling Moss was third in a shared drive with Maurice Trintignant, also driving a Cooper.

Reigning champion Jack Brabham stayed with Cooper alongside Bruce McLaren, the works team sticking with the Climax engined T51 for the season opener. There was a strong privateer Cooper contingent, with Stirling Moss and Maurice Trintignant remaining with RRC Rob Walker Racing and Harry Schell driving for Ecurie Bleue as he did in the final round the previous year. Like the works team, the customer teams all opted for the Cooper T51, with a Climax engine.

The exception to this was Scuderia Centro Sud, who powered their T51s with Maserati straight four engine. They ran with local duo Carlos Menditeguy and debutant Roberto Bonomi, the former having came close to victory at the circuit in 1956.

One of the two brand new cars on the entry was the Lotus 18, entered by the works team for Innes Ireland. The older Lotus 16 model was entered for Ireland's teammate Alan Stacey, along with a one-off appearence for Alberto Rodriguez-Larreta at his home event. The other British team to attend was BRM, with new signing Graham Hill pairing Jo Bonnier, the latter having won the teams first victory the previous year. Both drivers drove the aging P25 as they awaited a new car.

Camoradi International entered a Porsche Behra for Masten Gregory, who had left Cooper during 1959. The second brand new car on the entry list was the Scarab F1, entered for founder Chuck Daigh, however the car was unavailable and as such he failed to compete.

The rest of the grid was filled by privately entered Maserati 250Fs. These included debutants Antonio Crues, Gino Munaron and Nasif Estefano, and an entry for the more experienced Giorgio Scarlatti. The final Maserati was for Venezuelan Ettore Chimeri, with Julio Pola entered as reserve. Other reserve drivers were Oscar Cabalen and Pedro Llano, who drove Estefano's car throughout the weekend.