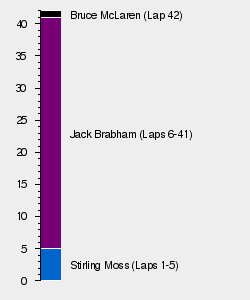 Moss had qualified on pole and led early on, while Wolfgang von Trips and team mate Brooks made contact, with the Brit pitting to check for damage.[1] Brooks rejoined at the back of the field, while Moss retired with a broken transmission, handing the lead to Brabham while Brooks battled through the field.[1] The Australian then ran out of fuel with two laps to go, handing victory to Bruce McLaren, with Maurice Trintignant and Brooks also getting past.[1]

Brabham, however, was determined to win his first title, and so pushed his car 400 metres to complete the final lap and finish fourth, enough to earn the title.[1] Brooks ended the season in second in the Championship, jumping ahead of Moss, but could have won the title but for his stop to discover a minor dent in his car.[1]

The Sebring International Raceway was to be found on a former United States Army Air Force base, which had been converted to a civilian airport and sports car venue in the 1950s.[1] Already renowned as a host of the World Sportscar Championship race named the 12 Hours of Sebring, the United States Grand Prix of 1959 was the idea of Alec Ulmann who managed to convince the FIA to stage an F1 race on the Florida circuit.[1] The circuit would use a mixture of runways and tarmac service roads, with the transition from surfaces also featuring large bumps.[1]

The long haul to America for the final race of the 1959 season saw several teams such as BRM opt not to send their equipment due to costs. Several privateers, including some drivers whom competed in the 1959 Indianapolis 500 held earlier in the season, were to fill the gaps in the entry list instead.[1] Yet, all of the major title contenders were in attendance, while organiser Ulmann tried to ensure that all of the entrants had experience of the circuit before the weekend.[1]

On the topic of the Championship there were three potential candidates, with Jack Brabham favourite. His tally of 31 meant he could afford to finish lower than his rivals, with both Tony Brooks and Stirling Moss needing to win the race, or at the very least get onto the podium. For Moss to win, the Brit had to either win the race, or finish second with Braham behind him, while Brooks needed to win the race with Brabham beaten by Moss.

The Constructors Championship could still see Ferrari over haul Cooper-Climax for the title, although drop scores would confuse the issue. Idealy Ferrari would need to secure first and second with none of the Coopers finishing. Elsewhere the absent BRM were safe in third, while Team Lotus sat in fourth as the only other team to have secured points.

The full entry list for the 1959 United States Grand Prix is outlined below, ordered by car number:

A dry day in the Florida sun greeted the competitors for qualifying, which was effectively the practice session for the weekend.[3] Before scrutineering it was confirmed that Rodger Ward's dirt racing Kurtis Kraft-Offenhauser Midget was accepted into the race, despite not conforming to Formula One regulations, while the privately entered Maserati of Ettore Chimeri failed to arrive and so was withdrawn.[4]

Despite alleged claims from Ward that his dirt racer could thrash the European built Grand Prix cars through the corners, the performance of the Cooper-Climax machines proved otherwise. Stirling Moss continued his impressive form to take pole, just missing out on breaking the three minute barrier, while Jack Brabham claimed second in the #8 works Cooper, three seconds down.[3] Tony Brooks seemed to have secured third to ensure that all three title contenders were on the front row, before a protest from Harry Schell, driving an Ecurie Bleue entered Cooper, moved the American up to third.[1] His claim was based on the fact that the organisers had failed to recognise one of his laps, which was good enough to take third.[1]

Maurice Trintignant completed the second row, with the remaining trio of Ferraris lined up on the third row, headed by Wolfgang von Trips.[3] Innes Ireland led the Team Lotus effort from ninth, ahead of the second works Cooper of Bruce McLaren, completing the top ten.[3] Roy Salvadori and Alan Stacey were next, ahead of the majority of the American based racers in their locally entered machinery.

Last of all was Ward, who found that the Coopers at the front of the field were strong on both straights and corners, with his roadster no match. The American ended qualifying almost three quarters of a minute off their pace, with none of the Formula One teams prepared to protest the car's entry despite its failure to meet F1 regulations.[3]

The final qualifying result for the 1959 United States Grand Prix is outlined below:

Another warm afternoon greeted the Formula One paddock on Saturday the 12th of December, with the temperature hitting 25°C.[3] The late change to the qualifying result, meanwhile, gave little time for Ferrari to protest the demotion of Tony Brooks to fourth, with only one other change to the grid.[3] The second privately entered Maserati of Phil Cade was to miss the race after an engine failure.[3]

The best starter proved to be Jack Brabham, as the Australian lit up his rear wheels to launch himself into the lead of the race, with Stirling Moss and Brooks slotting in behind.[2] They remained in that order until Wolfgang von Trips hit the back of his team mate, forcing Brooks into the pits to assess damage at the end of the lap.[1] Moss, meanwhile, was hustling Brabham for the lead, and duly passed the Aussie before the end of the first lap.[2]

Brooks' car had only suffered minor damage, with the Brit emerging down in fifteenth after the retirement of Bob Said who crashed all on his own.[2] Moss, meanwhile, was establishing his lead over Brabham, setting fastest lap to give himself the lead in the Championship, as Bruce McLaren began to rise through the field. Elsewhere, Rodger Ward was falling ever further from the pack, falling prey to the rejoining Brooks early into the third lap.

Suddenly, the complexion of the race, and the Championship, changed when Moss retired on lap five with a gearbox failure, leaving Brabham in the lead.[2] With Brooks dragging himself into the top ten having claimed the majority of the local drivers in the field, McLaren moving into second moments later, meaning Brabham had a rear gunner.[2] Maurice Trintignant was also moving up, battling Cliff Allison for third as the halfway mark approached.[2]

The bumpy surface of Sebring, particularly where tarmac met concrete, meant that the cars were being given significant punishment.[2] The respective demises of Roy Salvadori and Allison left seven cars still running with nineteen laps left, with Brabham beginning to drift into the sights of team mate McLaren.[2] Brooks, meanwhile, was pushing his car to the limit in his increasingly vain attempt to win the title, taking von Trips for fifth, putting him into the points.

However, fate seemed to have another role to play as, with just a few hundred metres left of the 1959 Championship, Brabham rolled to a stop, his Climax engine having drained the last of its fuel.[1] Brooks would flash past his title rival as the Australian pushed his car to the flag, although it was too little too late for the Brit, as both McLaren and Trintignant had gone past and finished the race.[1] McLaren just fended off a late challenge from Trintignant to win for the first time in Formula One, meaning he became the youngest ever race winner, while the Frenchman collected the point on offer for fastest lap.[1]

Brabham, meanwhile, forced his empty Cooper 400 metres to complete the final lap, ending the race collapsed on the finish line and being classified in fourth.[1] Brooks' mesmerising recovery drive had proved to be in vain, as Brabham won his first World Championship, with Brooks getting ahead of Moss in the final standings.

The final results for the 1959 United States Grand Prix are shown below:

Jack Brabham earned his first World Championship after the dramatic conclusion to the season, with Tony Brooks dragging himself into second. Stirling Moss moved down to third, with both he and Brooks left to rue issues in the final race to deny them victory. Phil Hill ended the season in fourth, one point ahead of Maurice Trintignant, while Bruce McLaren's end of season victory saw him leap into sixth. The only other mover in the Championship at the finale was Innes Ireland, whose fifth place finished moved him into the top fifteen.

There were no changes in the Constructors Championship, although Cooper-Climax managed to extend their lead over Ferrari. BRM stayed in third despite not sending their race crews to America, while Ireland snatched a further two points for Team Lotus as they ended the season as the fourth and final point scorer.