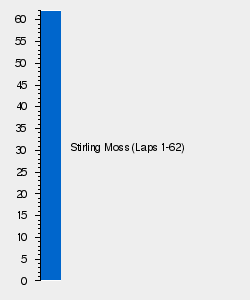 The 1959 Portuguese Grand Prix (VIII Gran Premio de Portugal) was the seventh race of the 1959 season, held on August 23. The weekend was dominated by Stirling Moss, who recorded his only career Grand Chelem. Second and third places went to United States drivers Masten Gregory and Dan Gurney.

It was the first and only race at the Monsanto Circuit in Lisbon, and was the debut for local racer Mário de Araújo Cabral.

The race was the seventh round of the 1959 championship and the third final round. Jack Brabham was the championship leader, having already secured two wins that year for the works Cooper team. He was joined by teammates Masten Gregory and Bruce McLaren, both having scored a podium each thus far, all works Cooper drivers piloting their regular Climax powered T51s.

Also in the championship hunt was Brit Tony Brooks, who had won two of the previous three Grand Prix for Ferrari. Brooks' teammate at Ferrari, Phil Hill was a distant third in the standings, but a regular podium finished, although he still awaited his first victory. The third Ferrari was piloted by Dan Gurney, who had achieved his first podium in only his second race in Formula 1 at the preceeding round in Germany. Having competed with four cars at the previous round, Ferrari slimmed to a three car operation, with Cliff Allison missing out. All three Ferrari drivers opted for the D246 that the Scuderia used throughout the year

Rob Walker Racing fielded two Cooper T51s, piloted by racewinners Stirling Moss and Maurice Trintignant. Moss had enjoyed a so far competitive year however chronic gearbox issues had so far limited him, although he had scored a podium driving for BRP. Trintignant had enjoyed consistent finishing, with a third place in Monaco the highlight.

BRM expanded it's lineup from the previous round with Ron Flockhart back at the wheel, having missed the German race. He was yet to score a point in 1959 but had came close at the French Grand Prix. Flockhart was joined by Harry Schell and Jo Bonnier, with the latter having won at Zandvoort earlier in the season. Schell had achieved a couple of points finishes already, BRM having their most successful season in the sport at the time.

Team Lotus brought a pair of Climax powered 16s, for Innes Ireland and Graham Hill. Ireland had scored points twice up to that point but Hill was yet to score. Aston Martin returned to the field with Carroll Shelby and Roy Salvadori driving DBR4s, both without a points finish in the British marque's first season in the sport. The Aston Martin team stood out as they used Avon tyres, the rest of the field preferring a set of Dunlops.

The entry list was completed by Scuderia Centro Sud, who entered three cars. However, the Maserati 250F of Fritz d'Orey was destroyed at the British round of the championship, meaning that like at the previous round, he could not actually participate in the Grand Prix. Ian Burgess also did not compete despite being entered in a Cooper T51, that unlike works cars, was powered by a Maserati engine. This left Mario Araujo de Cabral the only competing car for Centro Sud, driving his debut at his home race in car similar to that of Burgess.

The full entry list for the 1959 Portuguese Grand Prix is outlined below:

Practice took place on the Friday and Saturday proceeding the race, with both sessions starting at 6.15pm, owing to the warm summer sun. Despite the late start, Team Lotus were absent from the Friday session due to the team transporter breaking down in Spain.

Stirling Moss was fast from the outset and took pole by an astonishing two seconds from works Cooper driver and championship leader Jack Brabham. Cooper's made up the first four positions, with Gregory and Moss' teammate Trintignant ending up third and fourth respectively. Bruce McLaren by comparison struggled and could only manage ninth, while debutant Cabral was 14th and last of the Coopers, only ahead of the delayed Lotuses.

Of the BRMs, Bonnier was the most comfortable, the fastest non-Cooper in fifth, his teammates qualifying in the midfield. New boy Dan Gurney was the fastest of the Ferraris, the superior engine power in the D246 no match for the handling of the rear engined British cars. Hill qualified alongside Gurney, but championship contender Tony Brooks disappointed, not even going under the two minute ten seconds mark in tenth. The Aston Martins were off the pace of the rest of the regulars, Shelby hitting strawbales without serious consequences, although he did damage the nose of the car.

Already handicapped by missing the first day of qualifying, Lotus suffered reliability issues on day 2. A broken master break cylinder on Hill's car further restricted track time and Ireland had to deal with a faulty gear selection system throughout the session. As a result, the two Lotuses occupied the final two slots on the grid.

Due to the warm summer's heat, the race started in the early evening, at 5pm. Due to the slight incline on the straight, Brabham's mechanic lodged small stones underneath his car in order to check the car. As the flag dropped, Brabham was fast away, leading into the first corner followed by Gregory, poleman Moss dropping down to third. Bonnier's BRM dropped to the back due to engine cut out, Brooks braking heavily to avoid the BRM. By the end of the first lap, Moss had taken back the lead, followed by the works trio led by Brabham in a Cooper 1-2-3-4.

Phil Hill was running sixth when he went wide, dropping back to 13th by the end of lap 2. Innes Ireland became the first retiree of the race, as the gearbox issues that had restricted him during qualify reoccured, retiring after his third lap. Phil Hill was making his way up the field and was coming up to namesake Graham when the Lotus spun up onto the banking on the back straight, spinning back onto the track. Phil was unable to break in time to avoid the errant car, and both were eliminated in the resulting collision, with Flockhart also damaging his car in the process. Jo Bonnier finally retired after ten laps due to his engine issues.

Behind the four Coopers. the race had turned somewhat processional, with the only notable on track action being between the sixth placed Cooper of Trintignant, and Ferrari driver Dan Gurney in fifth. Moss was dominating the field, pulling out by nearly two seconds per lap, in contrast to fellow brit Tony Brooks. Brooks complained of misfire and the Ferrari pitted to try and find the problem. By the time he was sent away he had dropped into last position.

On lap 23, Brabham misjudged a move to lap Cabral, his Cooper flying off track and wrapping itself round a telegraph pole, the driver lucky to survive. This promoted Gregory into second place with McLaren going into the podium positions. Moss set the fastest lap on lap 28, but hopes of an all Cooper podium were dashed when McLaren pulled into the pits with Transmission issues.

The remaining ten drivers stayed mostly in position for the remainder of the race, with Moss coming across the line after two hours and 11 minutes to win the race by almost a lap, achieving the only Grand Chelem of his career. It was a Cooper 1-2 with Masten Gregory in second for the first team, and Dan Gurney showed his burgeoning talent with his second podium in three races. Maurice Trintignant in the other Walker entered Cooper took fourth and the final points were secured by Harry Schell for BRM, with his teammate Flockhart in seventh.

The Aston Martins finished sixth and eighth, Salvadori the furthest forward of the two. Tony Brooks, much delayed during the race finished five laps down, failing to capitalise on Brabham's non-finish. The final finished was Cabral in his debut race, six laps down, although he did well to finish. Championship leader Jack Brabham failed to finish in his Cooper along with teammate Brabham, other non finishers being Jo Bonnier, Phil Hill and the Lotus duo of Graham Hill and Innes Ireland.

The results of the race meant Moss moved up to third in the championship, with none of the main contenders scoring. Dan Gurney moved up three places to sixth, joint with Gregory who also moved up. Schell moved up one spot to 12th, while the other points finisher Trintignant was unmoved in fifth. There was no change in the standings of the constructors although Cooper did increase the lead at the top over Ferrari to six points.

The final results for the 1959 Portuguese Grand Prix are shown below: