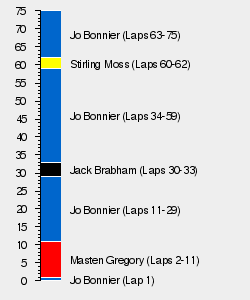 The 1959 Dutch Grand Prix was the third race of the 1959 Formula One Season, and was held on May 31. The race was notable for the only Formula One victory for Jo Bonnier, who piloted BRM to their first ever win after almost 10 years of trying. Second and third places went to the Cooper-Climax teammates of Jack Brabham and Masten Gregory.

The full entry list for the 1959 Dutch Grand Prix is outlined below: