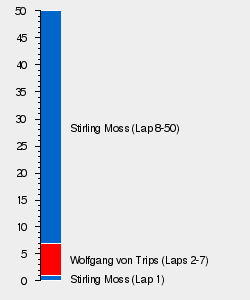 The 1958 Portuguese Grand Prix was held on August 24, and was the ninth race of the season. The race was won by Stirling Moss in a Vanwall, but main rival Mike Hawthorn brought home his Ferrari in second, and with the point for fastest lap Moss only made up one point on Hawthorn in the standings.

The full entry list for the 1958 Portuguese Grand Prix is outlined below:

Retrieved from "https://f1.fandom.com/wiki/1958_Portuguese_Grand_Prix?oldid=83695"
Community content is available under CC-BY-SA unless otherwise noted.