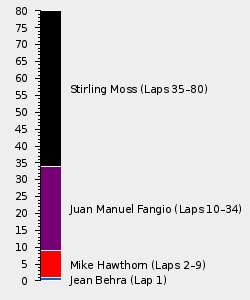 The 1958 Argentine Grand Prix was the opening race of the 1958 Formula One Season, held on January 19. Held in somewhat cooler conditions than usual, the race was won by Stirling Moss in a Cooper-Climax. Moss won a tactical race, exploiting the Cooper's lighter weight to save time by forgoing a lengthy pit stop to change tires. The Ferraris of Luigi Musso and Mike Hawthorn finished second and third. The race only had 10 entrants, the smallest field in Formula One history. Nine of the ten cars finished the race.

The full entry list for the 1958 Argentine Grand Prix is outlined below:

The full qualifying results for the 1958 Argentine Grand Prix are outlined below:

Retrieved from "https://f1.fandom.com/wiki/1958_Argentine_Grand_Prix?oldid=78771"
Community content is available under CC-BY-SA unless otherwise noted.