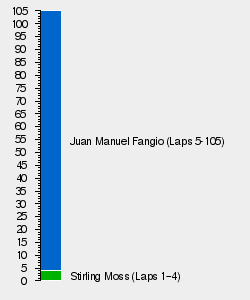 The 1957 Monaco Grand Prix was the second race of the season, held on May 19. The race was dominated by the Maserati of Juan Manuel Fangio, who won the race, set fastest lap and took the pole. If not for Stirling Moss managing to lead the first four laps, Fangio would have had a Grand Chelem.

Second place went to Tony Brooks in a Vanwall, 25 seconds behind Fangio, and Masten Gregory in another Maserati was third, two laps down on the leaders.

The full entry list for the 1957 Monaco Grand Prix is outlined below:

The full qualifying results for the 1957 Monaco Grand Prix are outlined below: