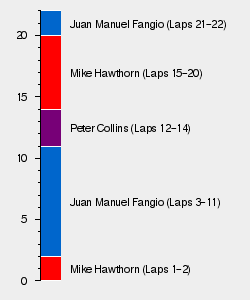 The 1957 German Grand Prix (formally the XIX Großer Preis von Deutschland) was a Formula One World Championship race held on 4 August 1957 at the Nürburgring. Held over 22 laps of the 14-mile (23 km) long circuit, the race is considered to be host to one of the most impressive performances in F1 history as Juan Manuel Fangio fought from 48 seconds behind second to win the race. The race included Formula Two cars to increase the size of the field.

Fangio had taken pole position in his Maserati 250F, with Mike Hawthorn in the Ferrari 801 alongside. Jean Behra (Maserati) and Peter Collins (Ferrari) completed the four-car front row. Fangio's pole time of 9 minutes 25.6 seconds was 2.8 seconds ahead of Hawthorn.

Come the race, Ferrari planned to not pit while Fangio decided upon a one-stop strategy on softer tyres. This didn't stop Hawthorn getting off the grid in the lead, ahead of teammate Collins and Fangio. Fangio took the lead on lap three and pitted, as planned, on lap 12, with a 30-second lead. However, this pit stop was disastrous; the left rear wheel nut became lost underneath the car and once it was found, Hawthorn and Collins had long gone past. Fangio emerged in third place, nearly 50 seconds behind the Ferrari pair.

Fangio started by taking 15.5 seconds off Hawthorn on his first lap and 8.5 the next. Setting not just fastest laps quicker than his qualifying time, but nine lap records, seven in succession, Fangio virtually drove the wheels off his Maserati in his chase. He caught with, and overtook, Collins early in the 21st lap and took the lead of Hawthorn later the same lap. Hawthorn challenged, but Fangio held firm to win the race, and his fifth World Championship title.

After the race, Fangio commented 'I have never driven that quickly before in my life and I don't think I will ever be able to do it again.' It would turn out to be somewhat accurate statement, as it was his final World Championship victory, and he retired in 1958.

The previous Championship race at Aintree saw reigning World Champion and current World Championship leader Juan Manuel Fangio retire, which in turn allowed the remainder of the of the field to cut his astonishing seventeen point lead in the title race, over Indianapolis 500 winner Sam Hanks, to just twelve, with Ferrari's Luigi Musso now second. Tony Brooks, who shared victory at the British GP with Stirling Moss, resided in third place, with ten points.

A non-Championship race was held between the British and German races; the Caen Grand Prix, which was won by Frenchman Jean Behra in a BRM.

The majority of entrants were invited manufacturers; private entries were not invited. Due to the reduced field this made up, Formula Two drivers were invited to race alongside. These F2 fought for separate honours and would not be awarded World Championship points were they to finish in the top five or set the fastest lap.

Maserati took five drivers, including Fangio, Jean Behra and Harry Schell in the 1957 cars, Giorgio Scarlatti in a works 1956 car and Paco Godia in his own 1956 car. Carlos Menditeguy was also entered into the race, but his car was unavailable. Scuderia Centro Sud also entered a pair of Maseratis, to be driven by Masten Gregory and Hans Herrmann.

Ferrari entered four drivers, three going into the race. Luigi Musso, Peter Collins and Mike Hawthorn were all to drive the Lancia-Ferrari 801. Maurice Trintignant was left without a drive, having been set to drive the new V6 F2 car, however, Enzo Ferrari felt no-one, let alone Trintignant, could do the car justice at the Nürburgring and thus the car did not arrive.

Representing Britain were the Vanwall team, with Stirling Moss, Tony Brooks and Stuart Lewis-Evans looking to make it consecutive World Championship wins. BRM received invites, but with Ron Flockhart injured, it was decided not to attend with two inexperienced drivers. These entries were filled by Bruce Halford and Horace Gould in Maserati 250Fs.

As for the Nürburgring itself, a large portion of the track had been resurfaced, but the layout remained unchanged. It was expected for the lap record, of 9 minutes 41.6 seconds, to fall during the race, due to both the resurfacing and the general improvement in F1 cars.

It was possible for Juan Manuel Fangio to seal the World Championship crown at the German GP, with two races to spare, as long as he held at least an eighteen-point lead following the race, given that no-one could match his win total.

The full entry list for the 1957 German Grand Prix is outlined below:

The full qualifying results for the 1957 German Grand Prix are outlined below: