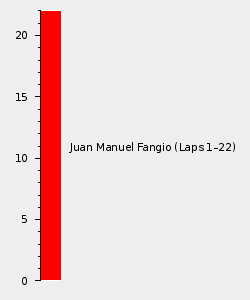 The 1956 German Grand Prix was held on August 5. It was the seventh race of the 1956 Formula One Season. Juan Manuel Fangio dominated the weekend in his Lancia-Ferrari, leading the entire race from pole, and setting the fastest lap. Maserati driver Stirling Moss was second, 46.4 seconds behind, and Jean Behra was the only other driver on the lead lap, but more than seven minutes behind.

None of the British teams made the trek to Germany, meaning that the entire field was nothing but Ferraris, Maseratis and a pair of French Gordinis.

The full entry list for the 1956 German Grand Prix is outlined below:

The full qualifying results for the 1956 German Grand Prix are outlined below:

Retrieved from "https://f1.fandom.com/wiki/1956_German_Grand_Prix?oldid=78315"
Community content is available under CC-BY-SA unless otherwise noted.