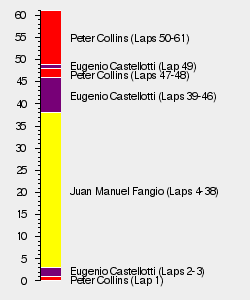 The 1956 French Grand Prix was held on July 1. It was the fifth race of the 1956 Formula One Season, and was held at the Reims-Gueux circuit. A race of attrition led to an exciting battle between the two surviving Lancia-Ferraris of Peter Collins and Eugenio Castellotti, which was thwarted 10 laps from the end when the team ordered the drivers to hold place with Collins in front, eventually winning by 0.3 seconds. Almost a minute and a half later came third place finisher Jean Behra in a Maserati, the only other car on the lead lap.

This race was notable for the only appearance of the Bugatti 251. Powered by an oversquare Inline eight engine, mounted transversely behind the driver. The car was entrusted to Maurice Trintignant, but the lack of development and funding was painfully obvious, and he retired it after 18 laps.

The full entry list for the 1956 French Grand Prix is outlined below:

The full qualifying results for the 1956 French Grand Prix are outlined below:

The full results for the 1956 French Grand Prix are outlined below: