Formula 1 Wiki
Register
Don't have an account?
Sign In
Advertisement
in: 1956 Grands Prix, British Grand Prix, Formula One races in the United Kingdom 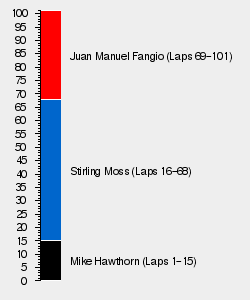 The 1956 British Grand Prix was the sixth race in the 1956 Formula One Season. Held on July 14, the winner was Juan Manuel Fangio in a Lancia-Ferrari. A shared drive between Alfonso de Portago and Peter Collins in another Lancia-Ferrari came in second a lap down, while the Maserati of Jean Behra was third, two laps down.

The full entry list for the 1956 British Grand Prix is outlined below:

All practice laps were timed to the even second, prompting another complaint from the FIA after similar incidents in previous years.

The full qualifying results for the 1956 British Grand Prix are outlined below: