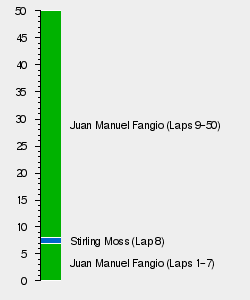 The 1955 Italian Grand Prix was held on September 11. It was the seventh and final race of the season, after the cancellations of the French, German, Swiss and Spanish GPs in the wake of the Le Mans disaster. The race was run for the first time on a combined road course-oval circuit, measuring exactly 10 km long. The high speeds attained on the new oval section, combined with flaws in construction, caused a number of tire and suspension issues with the cars.

The race was won by newly-crowned World Champion Juan Manuel Fangio, leading home teammate Piero Taruffi in a Mercedes 1-2. Eugenio Castellotti finished a rather distant third in a Ferrari. This was the last time a Mercedes chassis would run in Formula One for more than 50 years, as the team had already announced its withdrawal from all forms of racing in the aftermath of the Le Mans disaster.

The full entry list for the 1955 Italian Grand Prix is outlined below:

The full qualifying results for the 1955 Italian Grand Prix are outlined below:

The full results for the 1955 Italian Grand Prix are outlined below: