Formula 1 Wiki
Register
Don't have an account?
Sign In
Advertisement
in: British Grand Prix, 1955 Grands Prix, Formula One races in the United Kingdom 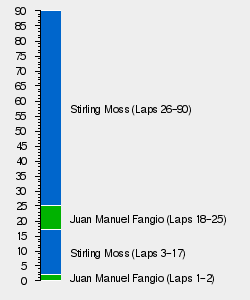 The 1955 British Grand Prix was the sixth race of the 1955 Formula One Season. It was held at Aintree Circuit on July 16, 1955, and became the penultimate round of the year, following the Le Mans disaster which led to the cancellation of the French, German, Swiss and Spanish Grands Prix.

This Grand Prix saw history being made, as Stirling Moss became the first Briton to win a British Grand Prix, winning in a Mercedes 1-2-3-4. In fact, the team was so dominant during the weekend that the top four in the race were Mercedes drivers, the highest of the non-Mercedes cars being the Maserati of Luigi Musso.

The podium was completed by Argentine Juan Manuel Fangio and German Karl Kling. It was also the debut for Australian driver, and future world champion, Jack Brabham.

The full entry list for the 1955 British Grand Prix is outlined below: