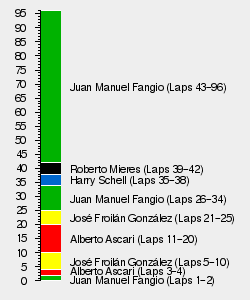 Run in extremely hot conditions, the race was won by Juan Manuel Fangio, ahead of the shard drive of José Froilán González, Giuseppe Farina and Maurice Trintignant. Farina and Trintignant, along with Umberto Maglioli, also finished third. Fangio took the fastest lap. The conditions caused many drivers to stop for relief, which resulted in drivers sharing different cars. The situation was so confusing that the organizers called in an accounting firm to audit the results.

As a result of the shared drives, Fangio lead the championship, 5 2⁄3 points ahead of Farina and Trintignant.

The first race of the season, four months ahead of the second, was to the third held at the Autódromo 17 de Octubre.

The only private entry was that of Uruguayan Alberto Uria, who drove a Maserati.

The cars seemed closely matched and on the front row of the grid was one of each of the cars from the big four teams: Gonzalez just ahead of Ascari, Fangio and Behra.

Race day was extremely hot and Fangio delighted the locals by getting into the lead on the first lap with Ascari and a fast-starting Stirling Moss chasing him. Then came Gonzalez and Farina.

Fangio's lead did not last long. Ascari challenged him and got ahead only to lose the lead soon afterwards to a flying Gonzalez. The racing stayed close in the early laps but on lap 22 Ascari made a mistake and crashed. His Lancia team mate Villoresi was already out because of early mechanical trouble and had taken over Castellotti's car but before Ascari could claim the car, Villoresi crashed, ending the Lancia challenge.

Moss disappeared with a fuel feed problem and a few laps later Trintignant went out with an engine problem.

And then the heat began to tell on the drivers. Farina pitted because he was exhausted, his car being taken over by Ferrari's spare driver Umberto Maglioli. Then Gonzalez came into the pits and so a revived Farina was sent out in his place. Fangio had to stop for some water and this enabled Schell and Mieres to go ahead although an exhausted Schell was soon handing over to Behra. Mieres ran into technical trouble and that meant that Fangio was soon back in the lead.

He was caught in the closing laps by Gonzalez - who was back in his own car which had been driven in the interim by Farina and Trintignant - but he then had an accident and ruined his chances. He did manage to rejoin and handed the car back to Farina who brought the Ferrari home in second place.

Third place in this complicated race went to Farina's original car which had been driven by Maglioli and then handed on to Trintignant before being handed back to Maglioli.

The hottest F1 race at the time meant that multiple drivers required replacements, and only Juan Manuel Fangio and Roberto Mieres survived the whole race without partaking in a shared drive. All in all, sixteen replacements took place, and three of the shared drives scored points, and while Fangio took the fastest lap, nine drivers scored points, and Fangio was left with a lead of 5 2⁄3 points in the championship over both Giuseppe Farina and Maurice Trintignant. Trintignant, Jean Behra and Harry Schell all managed to drive three different cars during the race.

Fangio suffered severe burns to his right leg after it rubbed against some exhaust-heated chassis frame for the duration of the race. It took the Argentine three months to recover, but he did not miss any championship events.

Note: The lap figures are the number of laps driven in the car of each entrant, not the individual stints.

Note: No other fastest laps were recorded.