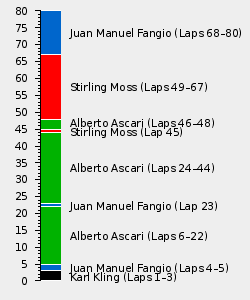 The 1954 Italian Grand Prix was held on September 5, 1954. It was the eighth race of the nine race season. Even though Juan Manuel Fangio had clinched the World Championship at the previous race, there was a healthy entry at Monza. After a race of attrition, Fangio inherited the win for Mercedes when the Maserati of Stirling Moss lost all of its oil. Second place went to Mike Hawthorn's Ferrari, ahead of José Froilán González, who had taken over teammate Umberto Maglioli's Ferrari earlier in the event.

The full entry list for the 1954 Italian Grand Prix is outlined below:

Retrieved from "https://f1.fandom.com/wiki/1954_Italian_Grand_Prix?oldid=78598"
Community content is available under CC-BY-SA unless otherwise noted.