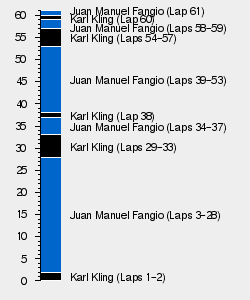 The 1954 French Grand Prix was the fourth race of the season. Held again at the Reims-Gueux circuit, it featured the overwhelming return to racing of Mercedes. Silver Arrows drivers Juan Manuel Fangio and Karl Kling finished 1-2, a tenth of a second apart and a lap ahead of the field, while the third driver, Hans Herrmann, recorded the fastest lap before retiring with engine problems. The final spot on the podium was claimed by private Ferrari driver Robert Manzon, but the Scuderia was clearly outclassed this weekend.

The Reims circuit had been slightly modified to shortcut the brick roundabout at Thillois. Ferrari was missing Giuseppe Farina, who had crashed heavily while leading in the Mille Miglia. Among his injuries was a broken arm.

The full entry list for the 1954 French Grand Prix is outlined below:

The full qualifying results for the 1954 French Grand Prix are outlined below: