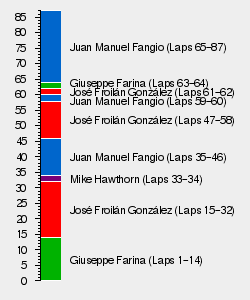 The 1954 Argentine Grand Prix (officially II Gran Premio de la Republica Argentina) was race number 1 of the 1954 Formula One Season. It took place at the Autódromo Juan y Oscar Gálvez on January 17 1954. The race was won Maserati driver Juan Manuel Fangio with Nino Farina in second and José Froilán González in third, both of Ferrari.

After the tragedy of the 1953 race, a number of changes had been made to the circuit, particularly in terms of security and spectator protection. But one change that was seemingly unrelated to that goal was the reversal of the track direction, from clockwise to counterclockwise. But that seemed to backfire, as the pole time was 10 seconds faster than in 1953. Even allowing for the change in formula, the experiment was never repeated.

The full entry list for the 1954 Argentine Grand Prix is outlined below: