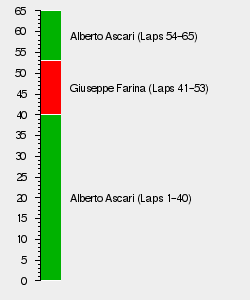 The 1953 Swiss Grand Prix was the eighth race of the 1953 Formula One Season, held at the Circuit Bremgarten, Berne, on August 23, 1952. Alberto Ascari led a Ferrari 1-2-3, ahead of Giuseppe Farina and Mike Hawthorn.

Although Alberto Ascari had dominated the pace at the Nürburgring, he had failed to take the victory and therefore failed to take the World Championship victory. However Ascari appeared set to take the world title if neither his teammates, Mike Hawthorn or Giuseppe Farina were to win the final two races consecutively.

Hawthorn and Farina had been the only drivers' to manage to steal a victory from Ascari in 1953 and therefore remained the only two drivers' whom could potentially beat Ascari.

Having failed to win at the Nürburgring, the Maserati drivers' had lost their opportunity to take victory in the world title. José Froilán González whom was still recovering from his injuries in Portugal would be replaced by Hermann Lang, the disputed 1939 European Championship victor. The pre-war veteran whilst now at the late age of 45 was being considered for one of the works Mercedes drives for the follwing season.

Gordini had enjoyed success in the prelude to the Swiss Grand Prix when Maurice Trintignant had taken victory at the non-championship Sables d'Olonne Grand Prix. There was a slight change in their driver line-up for Bremgarten. Harry Schell had opted to compete in a sportscar event at Goodwood instead of the Grand Prix and therefore Gordini recalled Fred Wacker to partner Trintignant and Jean Behra in the French team.

Like Schell, Peter Collins of HWM would also miss the Swiss Grand Prix for the Goodwood sportscar event. Paul Frère would therefore substitute his place in the team to race alongside Lance Macklin. HWM had also loaned out a car to Albert Scherrer, a wealthy Swiss driver whom was better known in Hillclimb racing.

Farina had previously been strong at this circuit. Having won the race in 1950, Farina was also set for another win in 1952, leading every lap of the race before his car failed him. Hawthorn meanwhile was making his first visit to the Bremgarten circuit.

The championship could however be claimed for Ascari if neither of these two drivers managed to win the race. Ascari had missed the previous year's race for his ill-fated Indianapolis 500 attempt. Having been forced to miss the race, Switzerland was the race on the European races that Ascari did not totally dominate.

Nonetheless, Ascari had been previously fortuitous on the circuit having won the race for Ferrari in 1949. Whilst Farina and Hawthorn remained his final threats, Ascari remained well poised to take the title. It would be a difficult task for Farina or Hawthorn to take the victory as throughout the season it had primarily been the Maserati's and Juan Manuel Fangio that appeared set to challenge Ascari.

Fangio whom had won the Swiss Grand Prix in 1951 was still hunting for Maserati's first championship victory in the season. If Fangio or any of the rest of the field were able to win the final two races then the championship would be decided in favour of Ascari.

The full entry list for the 1953 Swiss Grand Prix is outlined below:

Practice would take place at Bremgarten in the unique evening practice sessions throughout the Friday and Saturday of the race weekend. There was a minor controversy surrounding the field when the race officials allocated Ascari with a race number for the weekend that was different to the official entry list.

The first practice session was held under good conditions to which it was described as "fine and sunny". There was continued criticism of the current Formula Two regulations. It was lamented that "gone are the days when cars were fast enough to get into difficulties." The drivers' easily taking sections of the track in flat out power to which the cars in the Formula One era would have taken the cars "to the limit of adhesion" in the more powerful older cars.

In the qualifying battle it seemed to be a direct fight between Ascari and Fangio. Fangio was able to put in some magnificent flying laps to which he claimed Maserati's first pole position since his pole at the Belgian Grand Prix. Fangio had blitzed Ascari's best time, going six tenths faster than the Ferrari leader.

Farina was doing his best to keep in the game, however his wild laps saw him described as "never taking the same line twice". At the end of the first day he was third fastest and was 2.5 seconds behind Fangio whom was topping the timesheets.

Hawthorn, however had an even more difficult time. Having been described as being unwell in arriving to the circuit, he failed to impress on the first day to which he could only manage a frustrating seventh on the grid. Hawthorn was behind teammate Villoresi whom had been described as "not outstanding" throughout the day.

Also ahead of Hawthorn was Marimón's Maserati to whom was described as getting "lock to lock bounce" through the corners. Trintignant meanwhile had put in another outstanding for Gordini putting his car fourth on the grid ahead of two Ferrari's and a Maserati.

These times would be set to determine the grid when the Saturday practice session was washed out with rain in the evening. Ascari now set for second on the grid conducted a number of laps in his spare car. It appeared Ascari remained the favoured man in Ferrari to which he had been befitted a spare car before taking teammate and title rival, Hawthorn's car for a run late in the session.

Having had his car returned to him, Hawthorn returned to track to which he set the fastest time of the session in which he went 0.1 seconds faster than the time Ascari had set in his own car. Whilst Hawthorn and Ascari had mastered the wet conditions, Fangio whom was set for pole was more cautious in the conditions.

His new teammate in Lang was having some difficulty in getting his Maserati up to speed in the conditions. Fangio thereafter commandeered his car as befit the team leader to which he immediately set a time for the car that was 2.5 seconds faster than Lang had managed. Nonetheless, the time was still 6.5 seconds slower than the time he had managed in his own race car.