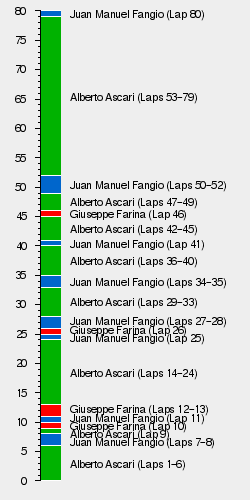 The 1953 Italian Grand Prix was (with the cancellation of the Spanish Grand Prix) the final race of the 1953 season. It was held at Autodromo Nazionale Monza on September 13. An exciting slipstreaming battle among several drivers saw leader Alberto Ascari spin out of contention on the final lap, giving victory to Juan Manuel Fangio.

With the world championship having been decided three weeks earlier at Berne, the Italian GP had a rather anticlimactic air to it. But Enzo Ferrari filled the news void, by announcing that the Ferrari team was withdrawing from auto racing, effective immediately. Ferrari's growing reputation for erratic behavior was enhanced, when not only did the team arrive with no fewer than six of their 500 models, but in practice a brand new model 553 was tested.

The 553 was designed to be run in the new 2.5 liter formula, but appeared at Monza with the Typo 500 2.0 liter engine, purely as a shakedown test. The car was not a success in 1954, only winning one race before the model was retired.

Maserati showed up with four factory cars and three privateers. Much of their effort was in testing new drivers, as the recovery of José Froilán González, who suffered a cracked vertebra in a sports car race in Lisbon, was not guaranteed. Filling out the field were four Connaughts, four Coopers (including one for rising star Stirling Moss), three Gordinis, three HWMs and two French OSCAs. All told the entry was second in the European races only to Germany.

The full entry list for the 1953 Italian Grand Prix is outlined below: