Formula 1 Wiki
Register
Don't have an account?
Sign In
Advertisement
in: Indianapolis 500, 1953 Grands Prix, Formula One races in the United States 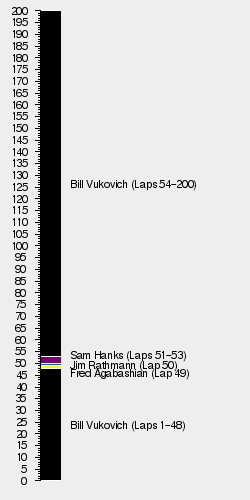 The 37th International 500 Mile Sweepstakes was held at the Indianapolis Motor Speedway on Saturday, May 30, 1953. The event was part of the 1953 AAA National Championship Trail, and was included in the 1953 World Drivers Championship.

Bill Vukovich, after falling just short a year before, earned the first of two consecutive Indy 500 victories. He had led 150 laps in 1952, but a steering failure put him into the wall with nine laps remaining. This year, he led 195 of the 200 laps, and had a four-lap lead at the end. But under Indianapolis rules at the time, drivers still on the track were not flagged off until more than 10 minutes after the winner crossed the line.

With the ambient temperature in the high 90s°F (>35°C), and the track temperature exceeding 130°F (54°C), this race is often known as the "Hottest 500." Due to the extreme heat conditions, several drivers in the field required relief drivers, and some relief drivers even required additional relief. However Vukovich, as well as second-place finisher Art Cross and the fifth, sixth and eighth place finishers ran the full 500 miles solo. But driver Carl Scarborough dropped out the race, and later died at the infield hospital due to heat stroke. Scarborough was only the second fatality at a World Championship event.

The full entry list for the 1953 Indianapolis 500 is outlined below:
(All drivers and cars from the

Practice officially opened on Monday, May 11. On Friday May 15, driver Chet Miller, the fastest qualifier of the 1952 race, lost control of his Kurtis Kraft-Novi in turn one. The back end of the car swung around, and then went backwards into the wall. Miller died of a basal skull fracture, and became the first person ever killed at a World Championship event.

Day one, Saturday May 16, was completely washed out by rain.

Sunday May 17 also saw a day influenced by weather, as only seven cars qualified. Fastest was Bill Vukovich, who put together a four lap average of 138.39 mph. This speed would hold up as the fastest recorded in qualifying. The other six drivers to qualify were locked into the top seven spots for the race, due to the rules of the event at the time. But based on time alone, they would have qualified 4th, 13th, 15th, 19th, 20th and 24th.

Saturday, May 23 was the busiest day of qualifying, when 17 drivers found their way into the field, including the third and the fifth through tenth fastest.

Sunday, May 24 was "bump day". Nine drivers qualified to fill out the field. Then bumping started, where the slowest driver in the field could be dropped from the grid by a faster qualifier, but that faster qualifier would be slotted behind the remnants of the 'first 33' qualifiers. Six of the first 33 were ultimately bumped, and one of those 'bumpers', Bill Holland, would set the second fastest time of qualifying at 137.87 mph. But by the rules he started the race 28th.

Drivers in italics were relief drivers.