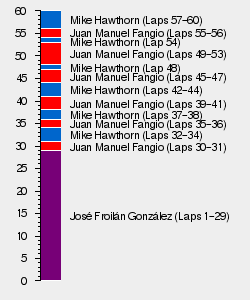 The 1953 French Grand Prix was a Formula Two race held on 5 July 1953 at Reims. It was the fifth round of the 1953 World Drivers' Championship, which was run to Formula Two rules in 1952 and 1953, rather than the Formula One regulations normally used.

Not only had the Reims circuit's layout changed, the name was different – both in regard to the same thing. The new, faster and slightly longer circuit bypassed the town of Gueux and as a result, the circuit was now called "Reims".

It is popularly known as 'the race of the century' because of the sixty lap battle between Briton Mike Hawthorn and Argentine Juan Manuel Fangio. Hawthorn won the duel after they reportedly swapped the lead at virtually every corner on the Reims circuit. In addition, after 500 km of racing, the four lead cars were less than 5 seconds apart.

The grand prix circus returned to the road course at the Reims Circuit for the French Grand Prix. The track had undergone a significant revision from the previous version of the circuit. The track was now made much longer, the circuit resembling more of the original Reims-Gueux layout. However the track still did not see the drivers race through the Gueux town as it had done in the pass. Nonetheless, the Reims Circuit remained notorious for its long straights where it was expected to be another power battle between Ferrari and Maserati.

The four works Ferrari 500's of Alberto Ascari, Giuseppe Farina, Luigi Villoresi and Mike Hawthorn had all had an addition 2.5L engine installed to compensate for the higher fuel consumption at the Reims circuit. Maserati was quickly gaining ground on the Ferrari's advantage, however their A6CGM remained less fuel efficient in comparison to the Ferrari 500.

Nonetheless, Maserati had an equally competitive driver line-up to combat the Ferrari front runners. After an excellent first race for Maserati in Belgium, Onofre Marimón had been signed to race for the team for the remainder of the season. He would be joining his mentors and fellow Argentine drivers Juan Manuel Fangio and José Froilán González, as well as the returning Italian veteran, Felice Bonetto.

The British representation was led by factory drives from HWM, Connaught and Cooper. HWM had their regular line-up of Peter Collins and Lance Macklin, whilst joining the team in a one-off return to grand prix for his home race was Yves Giraud-Cabantous. Stirling Moss had defected from Connaught to race Cooper's new Alta engined, T24 chassis. Cooper would make their second factory appearance of the season to debut their new challenger. Connaught would meanwhile seek to replace Moss in their team with Prince Bira, racing alongside regular driver, Roy Salvadori.

The rest of the field was made up of the privateer entrants. Emmanuel de Graffenried was racing his privately owned Maserati A6GCM whilst Louis Rosier was in his privately owned Ferrari 500. After nearly two seasons out of grand prix racing, Louis Chiron would make his return where he would race a privately entered OSCA 20. Also competing in a private OSCA 20 model was Élie Bayol. Competing in the old Cooper-Bristol T23 chassis were Ken Wharton and Bob Gerard whilst Johnny Claes was back in his privately owned Connaught after racing for Maserati in Belgium.

The full entry list for the 1953 French Grand Prix is outlined below:

As in Belgium, the grand prix was expected to be a battle between Ferrari and Maserati. The Maserati's had the superior straight-line speed, however this was balanced by the superior cornering speed of the Ferrari through the tight hairpins on the circuit at Viragede de Muizon and Virage de Thillois. Ultimately it was Ascari in the Ferrari that took the pole position, however he was only 0.3 seconds faster than a time set by González in Bonetto's Maserati.

Maserati's old veteran, Bonetto, was regularly the slowest of the Maserati drivers, therefore he handed his car over to González to see if he could improve his grid position. Quite ironically, González would set the second fastest time in his teammates car, going faster than even his own fifth placed time. This would mean Bonetto would get the opportunity to start second on the grid, despite not having set his official fastest time himself.

Villoresi was the second fastest Ferrari ahead of Fangio and González on the grid. The final works Ferrari's of Farina and Hawthorn were sixth and seventh on the grid, the time deficit between Ascari's pole time and Hawthorn's seventh place would be a meagre 2.5 seconds. Marimón was the last of the front runners in eighth position, his time was somewhat lagging after an encouraging start in the previous round at Spa-Francorchamps. His time was still faster than the privately entered Maserati's and Ferrari's of De Graffenried and Rosier in ninth and tenth.

The HWM's of Macklin, Collins and Cabantous followed thereafter ahead of the final runners of Salvadori, Schell and Claes. With the exception of a brief running by Schell, the Gordini team had elected to focus their efforts on the 12 Hours of Reims sportscar race and decided to start the race with no practice from the back of the grid. Likewise, a late arrival of Chiron's OSCA would see him start from the back of the pack.

There would be controversy ahead of the grand prix at Reims. During the 12 Hours of Reims sportscar race, the leading Ferrari car of Umberto Maglioli and Piero Carini would be disqualified for having their headlights turned off before dawn an hour before permitted. This was disputed by Ferrari when the car was called into the pits, the team noting that many other rivals were doing much the same. The car was allowed to rejoin the track, however after being push-started right in front of the race director, the race organisers decided to disqualify the leading Ferrari for "numerous violations".

The disqualification had prevented the Ferrari car from taking victory in the 12 Hours of Reims sportscar event. Enzo Ferrari was outraged, at home in Modena, he ordered his team manager, Nello Ugolini to withdraw his cars from the grand prix event. There was furious debate between the Ferrari management and the Reims race organisers about the Ferrari team's participation in the French Grand Prix. However at the last moment, Ferrari resigned and wheeled their cars onto the grid to begin preparations for the up coming race.

In the Maserati camp, González had opted to try running a risky low fuel strategy which would allow him to run faster than his rivals at the start in the hope that building up a sufficient lead would allow him to pit for fuel whilst regaining the lead of the race.

González significantly lighter car got a brilliant start and rocketed into the lead of the race. At the conclusion of the first lap, he led Ascari, Villoresi, Bonetto, Hawthorn, Fangio, Farina, Marimón, De Graffenried and the rest of the field. The Gordini's were already making an excellent start from their position at the back of the field, their cars making their passage through the midfield. However two of the four Gordini's, Schell and Mieres would join the Connaught of Salvadori in retirement on lap four when mechanical failure brought them out of the race.

González was pulling away at the front, however worryingly for him, he was not extending his lead at as big a gap as he would have liked. Bonetto ruined his front running performance when he made a big spin at the final corner at Virage de Thillois. Whilst Bonetto dropped down to tenth, he left a tremendous battle between Ascari, Villoresi, Hawthorn, Fangio and Farina for second position. Marimón was lagging a bit from the front battle, however he still held a strong lead over De Graffenried in eighth position.

Whilst this battle developed, the midfield runners were falling victim to attrition. Macklin had retired his HWM on lap nine, whilst a comeback drive from Trintignant's Gordini was ruined by transmission failure on lap 14. Wharton's Cooper had a stuck wheel bearing whilst Bayol retired his OSCA with a blown engine. Bira had his day brought to an end when his Connaught retired from eleventh with differential problems.

Throughout the first third of the race, González had desperately been trying to open up his lead of the race, his teammate Fangio had meanwhile been gradually making progress and by the 29th lap, he had passed Hawthorn, Villoresi and Ascari. González would be forced to make his fuel stop, however he had not been able to open up the lead he had hoped and would return to the circuit in sixth position, between the cars of Marimón and Villoresi.

Hawthorn had been the driver on the move, for the first time in the season he was proving capable of fighting as one of the quickest. He had first disposed of Villoresi, whom had begun to drop back and would then fall victim to Marimón who was looming in the background of the great battle for second. Hawthorn would then catch and pass Ascari, who was not demonstrating his usual dominance in the Ferrari team.

Fangio had since opened up a lead, Ascari having not been able to match his earlier pace, however the charging Hawthorn had managed to close up behind the leading Maserati. The duo of Fangio and Hawthorn began to pull away from the rest of the field as they diced for the lead. Fangio and Hawthorn left the crowd awed as they would change the lead lap after lap. Fangio's Maserati had a clear power advantage on the long straights, however the more nimble Ferrari of Hawthorn had better cornering speeds and acceleration.

Whilst this titanic battle for the lead continued, an equally exciting battle for third was also developing. Following his pit-stop, González was staging his fightback through the field. On lap 34, he would move past teammate Marimón, then on lap 36 he was past Farina, before on lap 37 he had taken third from Ascari. The Ferrari's of Ascari and Farina would continue to hound González tail. Marimón was also keeping up with this fight, however a stone thrown up by Ascari's car had penetrated his radiator, forcing him into the pits for repairs and out of the running. Farina would also gradually fall back and off the pace to González and Ascari, however he would maintain his fifth position.

Throughout the race, Fangio had more consistently held the lead over a total of fifteen laps, however although Hawthorn would only lead the race for eleven laps, it was the Ferrari driver who would take the victory. However on lap 57, Hawthorn secured the lead for the final time and maintained the lead for the final three laps. Fangio would try one final desperate attempt to pass at the final corner, Virage de Thillois, however it was Hawthorn who would take the race victory.

Ascari's nine race victory streak had finally come to an end, the Ferrari champion had a less than stellar performance, having been unable to overtake González's Maserati and being outclassed by his younger teammate, Mike Hawthorn. Whilst Ascari had lost the race, Ferrari's victory streak since the 1952 Swiss Grand Prix continued. Maserati had once again had a victory denied to them, however they were finally beginning to draw even with the pace of the Ferrari cars.

Behind the top five, Villoresi had a disappointing afternoon, having nearly been lapped on his way to sixth position. De Graffenried was two laps down on the leaders in eighth, then followed Rosier, a further four laps adrift and the hampered Marimón. Bonetto who was not matching the pace of the leader had retired with a blown engine. There was disappointment for France, their team, the Gordini's had suffered three failures, whilst their only finisher, Behra, was a very distant tenth.