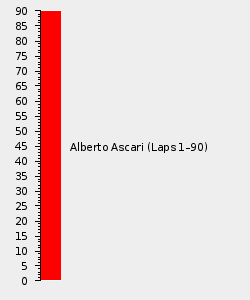 The 1953 Dutch Grand Prix was a Formula Two race held on 7 June 1953 at the Circuit van Zandvoort. It was the third round of the 1953 World Drivers' Championship, which was run to Formula Two rules in 1952 and 1953, rather than the Formula One regulations normally used. The 90-lap race was won by Ferrari driver Alberto Ascari after he started from pole position. His teammate Luigi Villoresi finished second and Maserati drivers José Froilán González and Felice Bonetto came in third.

A six month period had passed in between the first round of the world championship in Argentina and the Dutch Grand Prix. Nonetheless, a number of non-championship races had filled this time period. Ferrari were still the clear favourite for the championship, in the non-championship events, Ascari had taken victory at Pau and Bordeaux, Farina had won in Naples whilst Hawthorn had won races at Silverstone and Dundrod.

Maserati's works squad had elected to not fight the Ferrari's in the non-championship races. Gioacchino Colombo and Valerio Colotti continued to develop the A6GCM, hoping the six month gap in the championship would give them enough time to develop the car to a standard that would be able to match the dominant Ferrari 500.

The Maserati's hadn't been totally inactive in the non-championship races, they had managed a lone victory at Syracuse. Emmanuel de Graffenried who had purchased an A6GCM to race privately had won the race when the Ferrari's had retired due to mechanical trouble. For the Dutch race, De Graffenried would enter his A6GCM for Enrico Platé. Platé had run into financial difficulty and was struggling to update to the modern machinery, after running the now outdated Maserati 4CLT/48 model for years. He would, however make a return to the paddock to team up with De Graffenried once again for the Dutch event.

There had been changes within the Gordini team for the Dutch event. After wheel bearing failure had cost Robert Manzon an almost certain fifth place in Argentina, the team's long-time lead driver had grown frustrated with the lack of success and had quit the team. Maurice Trintignant was now expected to take the leadership of the team. Jean Behra had opted to take some further rest time, he had still felt he had not properly recovered from his injuries at Modena the previous year. As replacements, Gordini would have two American drivers in their team. Harry Schell had already competed in the championship for the team, however Fred Wacker, a sportscar driver who had impressed the team in competing in non-championship races was also signed. A fourth entry for Argentine driver, Roberto Mieres, would also be joining the team.

Cooper were not expected to make any more works entries into the championship following their venture at the Argentine Grand Prix. However Ken Wharton would continue to compete in the championship with the new T23 model as a privateer. Without Cooper, Connaught and HWM were once again expected to lead the British representation in the grand prix field.

Stirling Moss was expected to run the Cooper T23 for 1953, however after a troubled run at the Eifelrennen, Moss had elected to remain with the Connaught team. Alongside Moss at Connaught would be Kenneth McAlpine and Roy Salvadori. Johnny Claes had also purchased a private Connaught for his personal use in the championship.

HWM would continue with the same line-up as the previous year, both Peter Collins and Lance Macklin leading their charge. The team were now running a new chassis, the car being labelled as the HWM 53.

The full entry list for the 1953 Dutch Grand Prix is outlined below:

Before the grand prix, the race organisers had elected to resurface the Zandvoort track surface. This resurfacing with the addition of heavy winds blowing sand from nearby dunes onto the track surface had made the conditions incredibly slippery. Ferrari had elected to fit their cars with a wire gauze screen to prevent the blown sand from afflicting the driver. Maserati were quick to follow the idea of the grand prix's leading team.

As expected the practice sessions were a direct fight between the Ferrari and Maserati cars. Maserati's leader, Juan Manuel Fangio was once again proving that he was capable of matching the pace of all the Ferrari drivers with the exception of the reigning champion, Alberto Ascari. Whilst Fangio held the second fastest time, Ascari was able to push the Ferrari 500 to its full capability and held the pole time, a second faster than Fangio's best time.

Behind Fangio were the two Ferrari cars of Farina and Villoresi, the second fastest Maserati of González was fourth, however he was two seconds slower than his team leader. Hawthorn, once again was the slowest of the Ferrari cars, only managing fifth on the grid. De Graffenried, in the Enrico Platé Maserati was sixth, however he was nearly four seconds slower than Hawthorn's time. Suffering the most of the front runners was the works Maserati of Bonetto, mechanical troubles had meant that the best he could do was only thirteenth on the grid.

Rosier, in his private Ferrari was seventh, ahead of Moss, who impressed to get within the top ten in his Connaught chassis. Harry Schell was ninth, the Gordini driver had troubles with his own car and was forced to take the chassis of teammate, Fred Wacker. Wacker would therefore have no further running in the weekend, however Schell did well to outperform his team leader, Trintignant, who managed only twelfth.

Salvadori's Connaught was the last driver in the top ten, the final Connaught of McAlpine had struggled to match the pace of his two younger teammates, Moss and Salvadori. Rounding out the back of the field were Macklin, Collins, Claes, Wharton and Mieres.

The Ferrari cars made an excellent start, Ascari making his customary storm into the race lead. Behind him, his teammates Villoresi and Farina had moved past Fangio in the approach to the first corner whilst Hawthorn had passed González. At the end of the first lap, Ascari led Villoresi, Farina, Fangio, Hawthorn, De Graffenried, González and Moss.

The Ferrari's clearly had the advantage at the Zandvoort circuit, the top three of Ascari, Villoresi and Farina had begun to streak into the distance, leaving Fangio's Maserati with little opportunity to catch them. Behind him, González, had attempted to stage his comeback, he had overtaken De Graffenried on lap seven, however whilst pressuring Hawthorn he had suffered a rear axle failure which had brought him out of the race.

Earlier retirements had seen Macklin pull his HWM off with throttle problems, Salvadori's Connaught had suffered engine failure whilst Wharton had pulled his Cooper out of the race due to driver discomfort. González returned to the pits on foot where he signalled to take control of teammate Bonetto's car who was fighting an ailing midfield battle with Schell's Gordini.

González now returning to the race would begin a spirited fight back, his first challenge would be to get past the Gordini cars. His comeback was assisted when Mieres pulled off the circuit, he first moved past Trintignant before five laps later he passed the lead Gordini of Schell. He then quickly overtook De Graffenried for a second time to take sixth, he was then promoted to fifth when his team leader, Fangio, had pulled off the circuit with an axle problem.

Fangio's retirement had left Ferrari in a secure 1-2-3 position. Ascari was typically dominating in the lead of the race, whilst Villoresi and Farina continued to duel for second position. Hawthorn was somewhat lagging in fourth position, his position was coming under threat from González who continued to storm around the circuit. A spin at the Tarzan corner had meant González's drive to catch Hawthorn was somewhat hampered, however this did not discourage him and he continued to give chase to Hawthorn's Ferrari.

Villoresi had been desperately trying to shake off teammate Farina the whole race, however a throttle problem would force him into the pits. He had returned to the track in fourth, however it had become immediately evident that the problem was terminal and he returned to the pits to retire. There was some consolation for Villoresi, his fastest lap on lap 59 would not be beaten and he would secure one point in the championship.

Ferrari remained in a 1-2-3 position, Ascari and Farina's positions were quite secure, however Hawthorn continued to be chased by González. With only ten laps to the end of the race, González had managed to catch and pass Hawthorn's Ferrari, much to the disappointment of the Ferrari pit crew.

Nonetheless, their car in the hands of Ascari was once again unbeatable, Ascari took his now customary victory, dominating the race with a lead of 10.4 seconds ahead of teammate Farina. One lap behind,González was third ahead of Hawthorn, whilst a further two laps behind Ascari was De Graffenried, rounding out the final points position.

Moss had been running in sixth throughout the race, until a loose stone had damaged his Connaught's ignition system which had forced him out of the running. Schell had inherited the place, however he was later forced out with transmission failure. This meant Trintingnant finished sixth ahead of Rosier, Collins and Moss. Claes also saw the chequered flag, however he was not classified after completing only 52 laps.

Retrieved from "https://f1.fandom.com/wiki/1953_Dutch_Grand_Prix?oldid=84875"
Community content is available under CC-BY-SA unless otherwise noted.