Formula 1 Wiki
Register
Don't have an account?
Sign In
Advertisement
in: 1953 Grands Prix, British Grand Prix, Formula One races in the United Kingdom 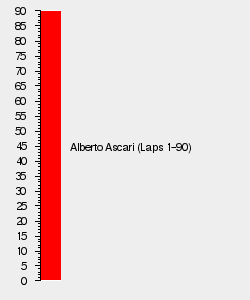 The 1953 British Grand Prix was a Formula Two motor race held on 18 July 1953 at Silverstone Circuit. It was the sixth round of the 1953 World Drivers' Championship, which was run to Formula Two rules in 1952 and 1953, rather than the Formula One regulations normally used. The 90-lap race was won by Ferrari driver Alberto Ascari after he started from pole position. Juan Manuel Fangio finished second for the Maserati team and Ascari's teammate Nino Farina came in third.

With Mike Hawthorn's victory at the French Grand Prix at the previous round of the championship in Reims, Britain had for the very first time enjoyed success in the premier category of grand prix racing. There was great anticipation amongst the British crowd, their leading driver was now second in the championship standings. However he still notably had a 14 points deficit to Ferrari teammate and championship leader, Alberto Ascari.

There were rumours abound that Ferrari were set to debut a new car at Silverstone, however these amounted to nothing as Ferrari arrived at the circuit with their regular 500 chassis. Whilst Ascari seemingly remained secure at the top of the championship standings, the Maserati quartet were becoming increasingly competitive with every race.

After a disappointing showing at their home grand prix in France, Gordini had cut down to only three cars for Maurice Trintignant, Jean Behra and Harry Schell. The team were expected to debut their new V8 engine which was expected to close the deficit to Ferrari and Maserati, however this update failed to materialise and the Gordini's arrived with their usual T16's with the L6 engines.

There was increased presence from the British contingent for their home grand prix. Aside from their usual line-up of Peter Collins and Lance Macklin, HWM entered an extra two cars for Jack Fairman and Duncan Hamilton. The cars were noted as looking particularly "tired" after a string of difficult performances in recent races.

The Connaught team whom had consistently demonstrated to be the most successful British team throughout 1953 would enter Prince Bira, Roy Salvadori and Kenneth McAlpine.  The privateer outfit, the Rob Walker Racing Team would make their debut in entering a Connaught for Tony Rolt to enter into the race.

Cooper works entrant would see the return of Peter Whitehead in the new Alta engined T24. Stirling Moss was also due to race for the team, however following the break down of his car at Reims, he would be forced to sit out his home grand prix. Ecurie Ecosse also entered a Cooper for Jimmy Stewart.

The full entry list for the 1953 British Grand Prix is outlined below:

Instead it was Peter Whitehead whom ran fastest in the works Cooper-Alta car that took the top of the timesheets. His time was so impressive that his nearest challenger, Mike Hawthorn's Ferrari was two seconds slower than his best time. The Ferrari's seemingly playing a cautious game in the wet. Farina whom was in third was a further four seconds off Whitehead's best whilst Ascari and Villoresi were both six seconds slower than the Cooper.

The following day on Friday was similarily afflicted with rain, however with the arrival of Maserati, the Ferrari's upped their performance and Whitehead's impressive first session time quickly fell by the wayside. Ascari found time to test both his and teammate Villoresi's car before going on to set the pole time, a full second faster than González's Maserati in second.

Hawthorn scored his best qualifying time of the season to which he was two tenths off González's time. Upon returning to the pits Hawthorn was warmly embraced by Ferrari's team manager, Nello Ugolini. Having been outqualified by both González and Hawthorn for the first time, Fangio had a more difficult qualifying in managing only fourth fastest.

Farina and Villoresi were fifth and sixth, whilst Marimón completed the Ferrari and Maserati monopoly in seventh. The Gordini's were inching closer in performance with Trintignant and Schell eighth and ninth, however Behra struggled and could only manage twenty third on the grid. Whitehead whom had impressed on the first day had seen his Cooper fall down to fourteenth on the grid. Instead rounding out the top ten, the first of the British runners was Tony Rolt in the Rob Walker entered Connaught.

Ahead of the race, Earl Howe unveiled the Pat Fairman Memorial Drinking Fountain. It had originally been situated at Donnington Park, however the RAC had organised the fountain to be moved to Silverstone, Britain's new premier racing circuit. The previous two days of practice had been drenched in rain and whilst the Saturday was still afflicted by sporadic showers, the conditions ahead of the race were set for overcast conditions.

Heading into Copse, Fangio got a magnificent start from the second row to take the lead. However he outbraked himself and ran wide to which allowed Ascari to snatch the lead back through the exit of the corner. González and Villoresi followed suit, whilst Marimón had moved into fifth. Hawthorn had dropped three places down to sixth, whilst Farina rounded out the Ferrari and Maserati leaders.

Schell, Trintignant and Macklin completed the top ten. Both McAlpine and Crook were left stranded on the grid, their cars both suffering mechanical failures that ended their race.

After a poor start, Hawthorn repassed Marimón on the second lap, only to wildly spin backwards off the track at Woodcote. He was described as being "visibly shaken", the spin being one that "could have easily ended his career."  Hawthorn returned to the pits where it was discovered that a fuel spillage caused by a leak in the tank had been responsible for him losing control.

Hawthorn was stuck in the pits for over a lap as his mechanics repaired the damaged fuel tank. González had meanwhile moved past Fangio and began to chase Ascari for the lead of the race. The battle between Ferrari and Maserati would commence as both Ascari and González began to trade the fastest laps of the race.

The Gordini's hoped challenge on the leaders failed to materialise with Schell retiring on the fifth lap whilst Trintignant was forced into the pits to repair a broken exhaust pipe. Other unscheduled stops saw Wharton need to fix a fuel pressure problem whilst Whitehead was forced to make changes to his brake adjustment. Gerard and Hamilton were early retirements whilst Trintignant's race would not last much longer when his problems became terminal.

González continued to push Ascari for the lead, however his car was leaking a trail of oil all around the track. The marshalls began to alert drivers' to the oil warning to which many of the British drivers were noted to have acknowledged the oil warning, Ascari however pressed deteminedly on. The troublesome González was then given the black flag to come into the pits on lap 17.

However González did not initially recognise the flag, the car apparently having its fuel leak resolved. Nonetheless the black flag continued to be waved to which a furious González entered the pits on the 20th lap. He angrily argued with the race officials that the problem was resolved to which the officials eventually permitted him to return to the track. However this comotion had meant that both Fangio and Villoresi had moved ahead of him on the track.

Bonetto had climbed up to seventh, however a stop for a plug change and then a further two stops to change the carburettas dropped his Maserati to the back of the field. Stewart then retired with ignition troubles whilst Behra the last surviving Gordini also would go on to retire. Macklin, the highest running HWM then pulled into the pits to retire clutch troubles. De Graffenried was also out of the race with a broken accelerator.

Ascari was dominating the race with Fangio and Villoresi enormously adrift of his lead. González continued to be the only driver who could match his pace in the race, however his pit-stop had put him well out of contention for the race win. Farina was holding the final points position, however he was coming under increasing pressure from Marimón's Maserati. Marimón moved past on lap 43, however Farina remained in his wake and reclaimed the place on lap 56.

Most of the cars were prepared to complete the race distance without a fuel stop, however both Whitehead's Cooper and Collins's HWM were two notable drivers whom would come into the pits for fuel. There were further retirements when Fairman had a clutch failure and then Collins had an enormous spin at Chapel. With the HWM stopped in the grass, Collins called upon a few mechanics spectating at Becketts whom attempted to restart his car to no avail.

After his problems on the first lap, Hawthorn had been steadily carving his way through the field and had began to close in on the points' placings. However behind the leading Ferrari's and Maserati's, Rolt's Connaught held station as the leading British car to whom was able to successfully keep the Ferrari behind him lap after lap.

González meanwhile was running low on fuel and became one of the drivers' to make a fuel stop. Upon exiting the pits he retained fourth position, however he was now only marginally ahead of the battling Farina and Marimón. There were further fuel stops for Bira's Connaught and Wharton's Cooper.

Marimón's race long battle with Farina would come to an end when his engine blew which ruined his opportunity to score some points. The same lap, Villoresi retired from the race with axle trouble. This had put González into third position, however it only lasted one lap as Farina whom had been constantly tailing him then made the overtake.

Rolt whom had excellently defended against Hawthorn's Ferrari only lost the position when his axle began to fail. After letting Hawthorn through, Rolt pulled off the circuit at Becketts. He then hitched a ride back to the pits on the back of a police poillion. He notably remembered to put his crash helmet back on whilst in their presence.

Inheriting his sixth place was Stewart's Cooper whom had been giving a flamboyant drive in his tartan overalls. Stewart had battled Bira's Connaught throughout the afternoon before Bira had to make his fuel stop. Thereafter he maintained a lead over Bonetto's Maserati whom had steadily climbed back through the field after three unscheduled stops throughout the race.

In the final part of the race, the overcast conditions finally developed into wet conditions when the dark clouds above the circuit finally opened. The circuit was not only hit by torrential rain but also a hail storm that pounded down on the drivers' in the final moments of the race. The storm did not appear to affect Ascari whom was described as "merely adjusting his cornering limits to suit."

Nonetheless, the conditions played havoc on his competitors. Whilst the cars drove increasingly conservatively in the final stages, Bira was one whom was finding difficulty in the conditions to which he spun his Connaught twice in the hail and rain. However Stewart whom had performed so admirably throughout the afternoon through away a good result when he spun off the circuit at Copse and crashed. Luckily he emerged from the incident unscathed.

The rain brought no major incidents thereafter and Ascari took the chequered flag in a dominant display to which he finished the race a full minute faster than in his nearest rival in Fangio. Fangio, however remained the only driver to remain on his lead lap with Farina and González finishing a full two laps down on the lead Ferrari. Hawthorn rounded out the points, putting in an excellent drive to claim points having lost a lap at the start of the race.