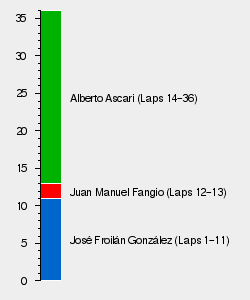 The 1953 Belgian Grand Prix was a Formula Two race held on 21 June 1953 at Circuit de Spa-Francorchamps. It was the fourth round of the 1953 World Drivers' Championship, which was run to Formula Two rules in 1952 and 1953, rather than the Formula One regulations normally used. The 36-lap race was won by Ferrari driver Alberto Ascari after he started from second position. His teammate Luigi Villoresi finished second and Maserati driver Onofre Marimón came in third.

The high speed nature of the Spa-Francorchamps circuit would present one of the best opportunities for the Maserati A6GCM to take the fight to the Ferrari 500's. The Maserati had demonstrated that it was capable of matching the Ferrari on the raw power circuits at the previous year's edition of the Italian Grand Prix at Monza. Spa-Francorchamps, a similarly high speed circuit was expected to provide another opportunity for Maserati to unhinge the Ferrari and Alberto Ascari dominance of grand prix racing.

There had been a slight change in the line-up for Maserati for the Belgian Grand Prix. Felice Bonetto had been rested after a disappointing start to the season, Johnny Claes, the popular Belgian privateer would get the opportunity to race a works Maserati for his home grand prix. The team would also welcome Onofre Marimón. Marimón would join the team for the remainder of the season, the Argentine, like José Froilán González, was a protege of Juan Manuel Fangio. The final Maserati entrant would be that of privateer, Emmanuel de Graffenried.

There would be a large contingent of the Ferrari 500's in Belgium. Aside from the works team's regular line-up of Ascari, Giuseppe Farina, Luigi Villoresi and Mike Hawthorn; Louis Rosier would enter his private Ecurie Rosier entered car, whilst local team, Ecurie Francorchamps, would enter cars for local Belgian drivers Charles de Tornaco and Jacques Swaters.

At Gordini, Jean Behra was now fully fit and would return to the wheel full-time from the Belgian Grand Prix onwards. He would be partnered in the team by usual runners Maurice Trintignant and Harry Schell, whilst Fred Wacker who failed to start the Dutch Grand Prix would also have another opportunity to race in the team. In the old Simca-Gordini model owned by Johnny Claes, another young Belgian, Georges Berger would make his debut in grand prix.

There was limited British involvement, only the HWM's elected to enter the race. The team's regular drivers of Peter Collins and Lance Macklin were joined by local driver Paul Frère. The Connaught owned by Johnny Claes's Ecurie Belge would be entered by André Pilette, whilst the final entrant was a lone Veritas car of Belgian Arthur Legat.

The full entry list for the 1953 Belgian Grand Prix is outlined below:

The Maserati's were finally able to take the fight to the Ferrari's, Fangio dominated the practice sessions, even Ascari was two seconds slower than Fangio's final time of 4:34.0 which despite the Formula Two machinery was a time that ran close to the lap record of the circuit. Ascari was now feeling the pressure of the renewed Maserati challenge, González, having nearly matched his best time.

Behind González's third place were the Ferrari's of Villoresi and Farina, whilst Marimón had put in a solid performance for his first race with the team to qualify in sixth position. Hawthorn was seventh, evidently still struggling to match his competitors in the top league. Rounding out the top ten were Trintignant's Gordini and the final Maserati's of De Graffenried and Claes.

Frère did an excellent performance in his first race of the season to qualify eleventh, his HWM teammates, Collins and Macklin were only sixteenth and seventeenth. Schell's Gordini was twelfth ahead of the struggling Ferrari of Rosier and Behra's Gordini. At the back of the field were Pilette, Legat and Berger. Berger's highlight being that he kindly gave Peter Collins a lift back to the pits on the back of his Simca-Gordini when Collins broke down on-track.

The two Ecurie Francorchamps entered Ferrari cars of Jacques Swaters and Charles de Tornaco failed to arrive at the circuit in time for practice and the race.

The Maseratis had looked the quickest throughout the weekend, therefore it was no surprise to see them look the quickest in the race. At the start, Ascari, for the first time in a very long time was overwhelmed at the start, both Maserati cars of Fangio and González moving past the Ferrari at the start. As the cars approached Eau Rouge it was González who would emerge the leader of the race.

The Maseratis were immediately on the pace, González going on to set what would be the fastest lap of the race on the second lap, before extending his lead to Fangio by over eight seconds on the third. Fangio, himself certainly was not slouching, he was ahead of Ascari by twelve seconds. The Ferraris were clearly not on the pace of the Maseratis, even Marimón was pressuring the Ferraris, having overtaken both Hawthorn and Villoresi on the fourth lap. The next lap Marimón had fallen down to sixth, whilst Hawthorn had moved up to fourth, swapping places with teammate Villoresi.

The Maseratis were doing well, González and Fangio were consolidating their lead and were looking to set to finally defeat their Ferrari rivals. However the Maseratis were still plagued by reliability problems, on lap eleven, the race leader, González, was forced to step with a broken accelerator pedal, whilst only two laps later, Fangio, was also out of the race when his engine failure. It was a disaster for Maserati, Fangio was 40 seconds ahead of Ascari before his retirement.

With González and Fangio both out of the race, once again it was left for Ascari to take command of the lead of the race. It would not all be a completely straightforward run for Ferrari, Farina would retire from second place with engine failure on lap 16. Marimón, continued to demonstrate the effectiveness of the Maserati, he continued to put in a strong performance in his first drive with the team, disposing of Villoresi to take third position. However he would find catching Hawthorn a much more difficult task, whilst Ascari was left in a once again untouchable position ahead of teammate Hawthorn.

The Maserati team leader took the opportunity to commandeer the final Maserati of Claes and return to the race. Claes, however had been underperforming and was left languishing in the midfield. Ascari was leading ahead of Hawthorn, Marimón, Villoresi, De Graffenried and Trintignant.

Fangio was charging in the car of Claes, he quickly caught and past the two cars of Trintignant and De Graffenried, and began to edge down on the large gap to the Ferrari of Villoresi in fourth position. His charge was assisted when a fuel leakage on Hawthorn's car forced him into the pits for repairs. Hawthorn would return to the track, albeit a lap down on the leaders.

Marimón, now in second began to develop concerns that he was suffering from engine trouble. He entered the pits, however his team advised him to return to the track and continue for as long as he could. The pit-stop had meant he had dropped to fourth behind Fangio and Villoresi. Hawthorn had made a strong comeback, moving past both Trintignant and De Graffenried before his hard work was undone when he was forced back into the pits again.

Ascari was set to take another dominant victory with Fangio running in a settled second position. However on the final lap, in the approach to Stavelot, Fangio suffered a steering failure which sent him flying into a ditch. He had lost a vital second position in the championship, however thankfully he had emerged from his accident with only cuts and bruises. Albeit, the Argentine champion returned to the pits in the back of an ambulance.

Ascari went on to win yet again, however for the first time in the season, the Ferrari dominance looked truely unsettled. Villoresi would finish in second position to complete a Ferrari 1-2, whilst Marimón provided some consilation for Maserati by finishing third in his first race with the team. Rounding out the points were the private Maserati of De Graffenried and Trintignant's Gordini. The final finishers of the race were Hawthorn, Schell, Rosier, Wacker, Frère and Pilette.