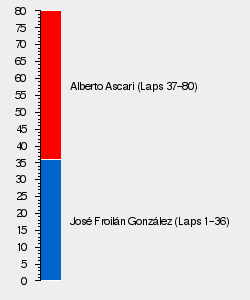 The 1952 Italian Grand Prix was a Formula Two race held on 7 September 1952 at Monza. It was the eighth and final round of the 1952 World Drivers' Championship, which was run to Formula Two rules in 1952 and 1953, rather than the Formula One regulations normally used. The 80-lap race was won by Ferrari driver Alberto Ascari after he started from pole position. José Froilán González finished second for the Maserati team, and Ascari's teammate Luigi Villoresi came in third.

The Italian Grand Prix at Monza would be the centrepiece for the finale of the championship season in 1952. Scuderia Ferrari and Alberto Ascari had already secured the title, two rounds ago at the Nürburgring. With the exception of the Indianapolis 500, the Ferrari's had won every round of the championship. Alberto Ascari, likewise, had won all the rounds he had participated in with the exception of the Indianapolis 500. If Ferrari were to complete their cleansweep of the opposition, they were required to win in front of their home crowd for the final race of the season.

The full entry list for the 1952 Italian Grand Prix is outlined below:

A record 35 cars would attempt to make their entrance into the final race of the season at Monza. However, the organisers decreed that the 35 car entry list was too big for what could be handled on the racing circuit at Monza. Instead, only 24 cars would be allowed to enter for the race. It was therefore imperative to the drivers that they were not among the eleven slowest in order to make it to the race.

The need to qualify was nothing that concerned the Ferrari's, Alberto Ascari continued to dominate the sessions, with his fastest time of 2:05.7 still being a second clear of Luigi Villoresi's second fastest time. A further second behind Villoresi was Giuseppe Farina in third, whilst a good effort from Maurice Trintignant's Gordini meant he would start from fourth on the grid.

The Maserati's did not provide the challenge to Ferrari that they would have hoped; González, the fastest of their cars, was only fifth, two seconds down on Ascari. Taruffi was disappointed that his best time could only land him sixth on the grid. He headed Manzon and the final works Ferrari entrant of Simon. Stirling Moss was the fastest of the British cars; he put in an inspired time to put him ninth fastest, after having used the slipstream of Ascari on his fastest lap. Bayol, in his debut race, also did an unexpectedly strong performance by putting the OSCA car tenth on the grid.

Behra was disappointed to be a lowly eleventh for Gordini, whilst regular breakages on his Bristol engine meant the Cooper car of Hawthorn could manage twelfth. Bonetto was seriously off the pace of his teammate González; however, despite only being thirteenth, he remained faster than the final works Maserati of Rol in sixteenth. Ahead of Rol sat Fischer's Ferrari and Wharton, entering a Cooper for the first time.

Rosier's Ferrari was seventeenth ahead of Landi, the fastest non-works Maserati. The final Connaught's and Cooper's of Poore, Brandon, Brown and McAlpine were rounding out the back whilst the slowest qualifiers were the Maserati's of Cantoni and Bianco.

Dusio and his bizarre Cisitalia failed to make it on track due to technical difficulties. Like Claes, whose Simca-Gordini also failed to make it on track, the same was for the non-qualifiers. The HWM cars of Collins, Macklin and Gaze, were all among the non-qualifiers; their Alta engine simply did not have the power to compete on Monza's long straights. De Tornaco was frustrated not to qualify his Ferrari 375, whilst the outdated Maserati 4CLT's of De Graffenried and Crespo were unsurprisingly amongst the non-qualifiers. The old Ferrari cars of Whitehead and Stuck were also eliminated as was the little Aston Butterworth of Bill Aston.

It had been one of the closest and most competitive practice sessions in history; the slowest qualifier of Bianco was only twelve seconds off the leading time. Despite a serious challenge from his opponents, Ascari would once again start the race from pole position.

Having dominated the season, Ferrari were determined to enforce their dominant reputation by winning their home Grand Prix. However, both Trintignant's Gordini and González's Maserati had proven to be capable of challenging the Ferrari's pace. Interestingly, the leading Ferrari's all got terrible starts; both González and Trintignant shot off the line from the second row. González took the lead whilst Ascari was forced to settle for second as he desperately fended off Trintignant. Manzon and Behra had also started well moving into fourth and fifth position whilst Bonetto achieved an incredible start to move to sixth in his Maserati from thirteenth. It had been a terrible start for Ferrari; only Ascari remained in the front running after the first lap. Villoresi, Farina, Taruffi and Simon were all languishing in the lower half of the top ten with the leading British cars of Hawthorn and Moss chasing on their rear. The first lap claimed the OSCA car of Elie Bayol, an unfortunate result after an impressive performance in practice.

González immediately began pulling out a lead; however, his A6GCM Maserati was not as fuel efficient as the Ferrari 375 of Ascari behind him. He would have to pit for fuel at some stage during the race. Nonetheless, his outright pace advantage in the early stages was concerning for Ferrari.

Fischer's privateer Ferrari retired on the third lap with engine problems; he was then followed out of the race by McAlpine's Connaught with suspension problems. Hawthorn's Cooper, who was running well in eighth, was then forced to pull into the pits with ignition trouble. It would take a full hour for his mechanics to repair his car and send him back on track, bringing him well out of contention. Trintignant, who had been hounding the rear of Ascari in the opening laps, was then forced to retire on lap five with an engine failure.

Ascari was not running to his usual form; although Trintignant had retired, González had continued to open his lead by a second a lap. Meanwhile, behind him, his teammate Villoresi had made it past Behra's Gordini, and on lap nine, had taken second place away from Ascari as well. However, he would not give up second place easily; he remained locked in the slipstream of Villoresi, and the two Ferrari's frantically pushed to catch González's Maserati.

Behind the top three, Behra remained the leading Gordini, sitting slightly ahead of the Ferrari's of Taruffi and Simon. However, both Behra and Taruffi would encounter mechanical troubles forcing them to head to the pits for repairs. Simon then encountered a sudden drop in pace and dropped behind Manzon, Farina and Bonetto.

González continued to lead; however, as the car's approached the midpoint of the race, the Maserati's would be forced to come in for their inevitable fuel stops. There was also a reliability concern; the final works Maserati of Franco Rol was forced to retire on lap 24 with engine troubles. Bonetto was the first Maserati into the pits, dropping him out of the battle for fourth place. A couple of laps later, González then pitted from the lead, allowing Ascari to return to first position. Villoresi had previously dropped behind his teammate; in his desperation to keep second place, he had worn down his tyres, and like the Maserati's, he would be forced to pit.

The Gordini challenge was now well and truly over; Behra, who had already dropped out of the lead race, then retired on lap 42 with engine troubles. Manzon then lost fourth place when he was forced to pit for new spark plugs. By the time he rejoined the track, he would be multiple laps down on the leaders. Farina had therefore taken second place; however, he was quickly being hunted down by González and Villoresi behind him.

There was further concerns for Maserati; the privateer car of Bianco retired on lap 46 with engine troubles. Nonetheless, the lead Maserati's were running well; González had retaken second place from Farina and was hunting down Ascari, matching the world champion's best time. The second car of Bonetto, whilst sitting in fifth and having been lapped by Ascari, was also demonstrating impressive speed. He had even managed to unlap himself, as his Maserati power proved the equal to the Ferrari.

The Connaught car of Moss had been topping the midfield; he had ran consistently in eighth place throughout the race, but gear valve troubles had prevented him from challenging higher up the field. On lap 60, a sturdy drive was brought to an end when a suspension failure forced him into the pits. His teammate Poore had taken up eighth place, having followed Moss throughout the race; however, a long fuel stop dropped him well down the field.

The final laps were fairly processional; Ascari would go on to take the victory to complete of the most dominant Grand Prix seasons by a single driver and team in Grand Prix history. Nonetheless, like the Alfa Romeo domination before them, it was not expected to last for long. The impressive display from the Maserati's in which González claimed second and Bonetto fifth would mean the Ferrari's would be expected to have a much greater challenge in 1953. Villoresi with his new tyres had managed to retake third place from Farina, the last of the drivers not to be lapped by Ascari. Villoresi had somewhat quashed rumours that he was no longer capable of competing among the top after his early season injuries.