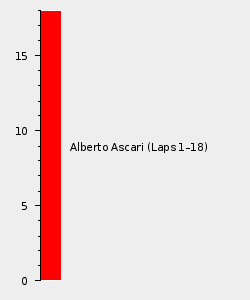 The 1952 German Grand Prix was the sixth race of the 1952 Formula One Season, set to take place at the Nürburgring, Nürburg, Germany over the weekend of August 3rd, 1951.

This race was won by Alberto Ascari of Ferrari.

As a consequence for the Second World War, Germany had been banned from competing in international motorsport. In 1951, the FIA agreed to lift the ban on Germany's involvement in international motorsport.The previous year it had already secured its return to the international grand prix calendar and by 1952, manufacturers like AFM, Veritas and BMW were now beginning to bring their new cars into the international Formula Two scene. Mercedes, who had dominated the grand prix scene in the 1930's was already planning a return to grand prix upon the return to Formula One regulations in 1954. Mercedes had already met immediate success in 1952 with their W194 sportscar. With most of the British contingent remaining at home after Silverstone to participate in the Daily Mail Trophy, the grid was freed up to allow for a greater presence of the German local entries, all looking to finally make their mark on the international racing scene.

The full entry list for the 1952 German Grand Prix is outlined below:

Alberto Ascari took his fourth pole position in a row,his best time was only 2.4 seconds clear of Giuseppe Farina's second fastest time. The long twisty nature of the Nurburgring had allowed the performance gap to narrow between Ferrari and their rivals. Gordini were quick in practice, Trintignant in third was only three seconds slower than Ascari. Manzon in fourth was only a further four seconds adrift, the two drivers pleased to beat Piero Taruffi's works Ferrari.

Fischer in the private Ferrari was sixth, whilst Paul Pietsch was the fastest of the German contingent to move into seventh in his Veritas. Hans Klenk also performed well to take eighth on the grid in his own Veritas whilst Willi Heeks was the fastest AFM in ninth. Maserati's hopes of challenging Ferrari were dashed, Felice Bonetto could only manage tenth on the grid. Behra still recovering from his Chimay injuries was only eleventh on the grid, ahead of Riess and the HWM's of Frere and Gaze.

The HWM's were having trouble, both Collins and Claes had crankshaft failures and were unable to participate in practice. Ludwig Fischer's AFM was having similar issues and he likewise failed to make it out on track in practice. Harry Merkel's BMW failed to even make it to the circuit. Collins would frustratingly be unable to start the race, unlike Claes and Fischer he had never had any experience on the track and was not permitted to race with so little experience.

The Grand Prix was to be the final spectacle in what had been a large celebration of the 25th anniversary of the Nurburgring circuit with the circuit designer, Gustav Eichler held as the guest of honour. Support races had been held throughout the day, most notably, the Mercedes cars of Karl Kling and Hans Herrmann dominating the sportscar race. The Mercedes sportscars setting times faster than the third best time on the grand prix grid. It had been an impressive note of return for Germany to motorsport.

Ascari shot away from the start to take a somewhat expected lead of the race, behind him came Farina, Manzon and Taruffi. Bonetto had got an excellent start in his Maserati and had climbed to fifth. However after only half a lap, he suffered a puncture which sent him spinning into a ditch. After gaining assistance for the marshalls in pushing him out of the ditch, he limped around at the back of the field for another half a lap, only to return to the pits to be disqualified for receiving outside assistance. Bianco in the private Maserati would also retire his new A6GCM with engine failure. Trintignant was also having problems, he had dropped back at the start and then on the second lap he ran wide and damaged his suspension, forcing his retirement.

There was an extremely high rate of attrition at the Nurburgring, after only two laps, Carini, Peters, Helfrich, Frère and Pietsch had all joined Bonetto, Trintignant and Bianco in retirement. Aston, Schoeller and Krause were the next to retire on lap three. Cantoni in the final Maserati was out on lap four whilst lap five saw the retirements of Bechem, Balsa and Brudes. Gaze retired on lap six whilst Heeks was out on lap seven.

In the early laps, Taruffi had managed to make his way past the Gordini of Manzon to take third place. The Ferrari's once again seemingly unchallenged in their positions of 1-2-3 in the race. Ascari having set the fastest lap of the race on lap five and continuing to dominate the race, seemed likely to take the world title so long as nothing happened to his race lead. Manzon meanwhile was doing his best to keep pace with the Ferrari's, however on lap eight a wheel detached from his car, Manzon luckily managing to maintain control of his three wheeled Gordini to park his car in the grass.

The Ferrari's came in for a pit-stop during the mid-race, the three cars leaving the pits without drama. It seemed a relatively straightfoward 1-2-3 for Ascari, Farina and Taruffi, however drama began to unfold on the second last lap. Ascari who had opened up a massive lead to Farina in second decided to come in for a second pit stop. Ascari wanted his oil topped up, however the move had caught his mechanics unawares. The team in their desperation to serve Ascari quickly had let Farina take the lead of the race. More drama began to unfold when Taruffi began to suffer from a damaged suspension, causing him to fall into the clutches of Rudolf Fischer's private Ferrari.

Farina was left in the lead with a comfortable nine seconds to Ascari in second position. However Ascari returned to the track, determined to push on to take the victory and his first world title. Mid-way through the final lap, Ascari had caught his teammate and had pushed his way past to take the lead from Farina. Taruffi, meanwhile had lost third to Fischer who was now set for his first world championship podium. Taruffi being forced to be content with the three points for fourth, Behra in fifth place being too distant to challenge him.

After two seasons of close racing, 1952 had been dominated by a lone individual so far, that of Alberto Ascari. The man who allowed Ferrari to achieve their first championship success had thoroughly controlled the season. With Fangio still injured and Farina beginning to show his age, Ascari had ascended to the top of grand prix racing.

Retrieved from "https://f1.fandom.com/wiki/1952_German_Grand_Prix?oldid=87190"
Community content is available under CC-BY-SA unless otherwise noted.