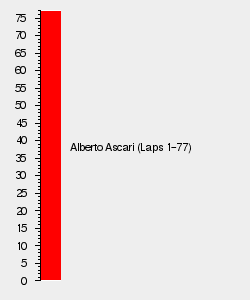 The 1952 French Grand Prix was the fourth race of the 1952 Formula One Season, set to take place at the Rouen-Les-Essarts, Francorchamps, Grand-Couronne, France over the weekend of July 6, 1952.

This race was won by Alberto Ascari of Ferrari, putting him in the lead of the World Drivers' Championship five points ahead of Piero Taruffi

It was a new venue for the French Grand Prix for 1952, the ACF decided to switch from the Reims circuit to the Rouen-Les-Essarts circuit for the new season. The Rouen street circuit was considered to be one of Europe's finest new circuits, the track having modern pits lying ajacent to the track, rather than simply on the side of the start-finish line. It also was equipped with large grandstands and wide roads, making it a suitable new venue for the historic French Grand Prix.

The French hopes of a challenge from the Gordini's were somewhat dashed by the domination of the works Ferrari's during practice. Ascari would take the pole position with a time of 2:14.8. Farina was second on the grid, however he was a further 1.5 seconds off the pace. Taruffi in third was a further second down on Farina's best time.

The Gordini's meanwhile were left as simply second best. Behra was the fastest of the Gordini's, however he was five seconds off the pole time set by Ascari's Ferrari. Manzon then joined him in fifth, whilst Trintignant racing the old Simca-Gordini did well to put his older model sixth on the grid. Peter Collins's HWM was the only car to get amongst the Gordini's, putting his car seventh one position ahead of the disappointed Bira in eighth place.

Rosier was still struggling to get the private Ferrari 500 to work properly and was well off the pace, putting his car only in ninth position. Giraud-Cabantous was the second fastest HWM in tenth, he was a full six seconds down on his young teammate, Collins's pace.

The old Maserati's of De Graffenried and Schell were eleventh and twelfth with Whitehead's Alta sitting in thirteenth ahead of Macklin in a disappointing fourteenth for HWM. After an incredible debut, Hawthorn had consistent troubles during the French qualifying and could only put his Cooper fifteenth on the grid.

Landi had failed to arrive for the event, however Étancelin arrived in France with the new Maserati A6CGM, however he failed to make his mark with the car. The model had been proven quick in the hands of the works team and the likes of Fangio and Gonzalez, however France's veteran, Étancelin could only manage a dismal sixteenth on the grid. The minor Ferrari cars of Fischer, Comotti and Carini as well as the old Simca-Gordini car of Claes made up the final rows of the grid.

Ascari made a flying getaway off the line to take an immediate lead in the race. Farina followed, however Taruffi, like in Belgium made a poor getaway allowing the two Gordini's of Behra and Manzon to slip past, much to the pleasure of the French crowd. The two Gordini's were pushing desperately hard as they tried to keep up with Ascari and Farina's Ferrari's, however the leading Ferrari's were quickly taking control of the race. The wild racing Behra spun wide into a ditch on the third lap, he rejoined the track but was forced to pit for repairs. The same lap, the third Gordini of Bira was into the pits to treat an engine misfire.

Manzon, still recovering from his injuries at Reims was unable to keep pace with the two leaders and then on lap four Taruffi repassed him to put Ferrari into a 1-2-3 position. Manzon had lost pace to the Ferrari's, however he remained comfortably ahead of teammate Trintignant in the older Simca-Gordini, he himself was under pressure from the two HWM's of Collins and Macklin as well as Hawthorn's Cooper. Carini's old Ferrari 166 became the first retirement when he pulled out on the second lap with engine failure. Schell then dropped out of the race when his old Maserati dropped out with gearbox issues. At the back of the field, Claes retired his Simca-Gordini with a blown engine, Rosier who was still struggling with his 'Ecurie Rosier' entered Ferrari 500 then retired from the midfield with engine troubles.

The order at the front of the field began to stabilise, the Ferrari 500's dominating at the head of the field. The Ferrari trio were left unchallenged whilst a healthy gap began to appear between the three cars. Ascari was comfortably dominating whilst Farina held his own gap to Taruffi's third place. Manzon, the lead Gordini remained a long way off the pace of the Ferrari cars.

Hawthorn who had impressed on his debut in Belgium, was now moving up the field once again. Providing the excitement in a fairly processional race, Hawthorn had started fifteenth after a poor qualifying, however had worked his way up to eighth. On lap 26, Hawthorn moved past Macklin's HWM, however he then became stuck behind the lead HWM of Collins who proved much more formidable to overtake. Hawthorn's Cooper was quicker, however Collins was determined to fight for his position. For over 15 laps, two of Britain's most promising young talents battled hard for seventh position. On lap 42, Hawthorn finally made it past Collins's HWM. Trintignant, in the old Simca-Gordini was only slightly ahead of the battling Brits and it took Hawthorn only three laps to move past Trintignant and into the points.

During this time there had been more retirements, Whitehead had found swapping his old Ferrari 125 for the Alta chassis had brought little improvement, retiring from the tail field with clutch failure on lap 26. Upon his first retirement, Schell had returned to the pits and had commandeered Enrico Platé teammate, Baron de Graffenried's car. He would then retire for a second time on lap 34, the brakes on De Graffenried's car having failed. The most significant retirement was to come on lap 51. Shortly after overtaking Trintignant for fifth, Hawthorn began to develop a misfire in his Bristol engine where he would subsequently drop back behind Trintignant, Collins and Macklin. Hawthorn returned to the pits to check his engine, however after returning to the track, Hawthorn's engine problems persisted and he decided to retire for good.

The Gordini's of Bira and Behra who had their races ruined at the start, had began to climb through the field once again. Both drivers had climbed to the rear of Collins, who as ever was proving determinedly difficult to pass. Bira retired with axle problems on lap 56 whilst a frustrated Behra was left looking for an opening on the unpassable HWM.

The race at Rouen had proven incredibly uneventful, Ascari was left to dominate the race, completely unchallenged in which he finished an entire lap ahead of teammate Farina in second place. Farina meanwhile was a further lap ahead of Taruffi's third place whilst Manzon's Gordini, the highest finishing non-Ferrari was a whole lap adrift of Taruffi. Trintignant took fifth, himself distanced, two laps behind Manzon, yet two laps ahead of Collins's sixth place. Collins had held Behra off until the end, on the final lap as he approached the chequered flag, the HWM's axle failed forcing him to coast across the line, yet remarkably still ahead of Behra's Gordini.