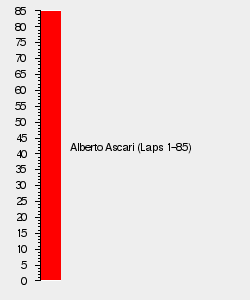 The 1952 British Grand Prix was the fifth race of the 1952 Formula One Season, set to take place at the Silverstone Circuit, Silverstone, Northamptonshire, England over the weekend of July 19, 1952. The circuit was modified and was lengthened slightly.

This race was won by Alberto Ascari of Ferrari.

During the off-season, the Silverstone circuit was slightly modified and became very slightly longer in distance. Therefore the 1952 race was five laps shorter compared to the 1951 race. The main modification to the track was the relocation of the pits, which were moved from the Farm Straight to the following straight. Anyone important change was that the start/finish line was no longer located before the pit entrance, but rather it was positioned half way down the pits.

The Ferrari's unsurprisingly were once again the dominant team during the practice times. However it was Farina, often strong at Silverstone who went on to take his first pole position of the season. Ascari, had equalled his time of 1:50.0, however since Farina set the time first, he was awarded with the pole position. Taruffi was slightly lagging, his third fastest time was two seconds off Farina and Ascari, however he remained a further two seconds faster than Manzon's Gordini, the fastest non-Ferrari.

The Connaught's making their championship debut proved to be competitive, Ken Downing only a second off Manzon's best time. Matching Downing's times were the two Cooper's of Parnell and Hawthorn and Poore's Connaught. Thompson was ninth in his Connaught whilst rounding out the top ten was Bira's Gordini.

Hamilton was the fastest of the HWM cars, the team being disappointed to be outmatched by their Connaught and Cooper rivals. Graham Whitehead's Alta was a decent twelfth on the grid ahead of Brown's Cooper and Collins's HWM. Fischer was a disappointing fifteenth in his Ferrari whilst Moss could only manage to put the ERA sixteenth on the grid.

McAlpine was the final of the Connaught cars down in seventeenth, Brandon also struggled to match his teammates in his Cooper down in eighteenth. Salvadori was unable to make effect of his private Ferrari 500 and could only manage ninteenth, a single position ahead of Whitehead in the outdated 125 model. Trintignant was also struggling, managing to only place his Gordini in twenty first.

The final positions were occupied by Murray, Claes, Hirt, Crook, Gaze, Cantoni, Bianco, Macklin and the unreliable Aston Butterworth of Bill Aston. The Enrico Plate Maserati's of De Graffenried and Schell failed to arrive before practice, however would attend the race from the back of the grid. Rosier's private Ferrari and the Frazer Nash of Wharton failed to attend the circuit at all.

Prior to the race start, the British contigent were kept entertained by the Formula Three support race in which Stirling Moss took a dominant victory ahead of Eric Brandon. Both drivers were hoping for similar fortunes in the main event, the Formula Two race. However the race was expected to once again be a dominant display of the Ferrari power.

Ascari was once again the Ferrari to make the best start, he streaked ahead of pole sitter Farina who had got a lot of wheel spin off the line. Taruffi had managed a terrible start and had dropped down into the midfield. Dennis Poore had got an incredible start, leading the midfield past Taruffi, his little Connaught nearly making it past Farina's Ferrari at the first corner. At the end of the first lap, Ascari led the field ahead of Farina, Poore, Downing, Parnell, Thompson, Manzon, Hawthorn and Taruffi. Eitel Cantoni racing the new A6GCM Maserati would only make it a few corners before suffering brake failure, ending his race. Peter Hirt's Ferrari sportscar was the next victim of the race, he too pulled out with brake failure on the third lap.

Ascari immediately began to open up his seemingly customary lead, whilst behind him Farina was struggling to shake off the two Connaughts of Poore and Downing. Taruffi was beginning his recovery after a poor start, on the second lap he moved past Hawthorn and then on the third he was also past Manzon. Manzon would thereafter pit to retire with a clutch failure.

The Connaughts were running an impressive debut, both their lead cars of Poore and Downing were keeping pace with the Ferrari's. Taruffi had managed to get past Poore's Connaught quickly, however the lead car of Poore was proving more problematic. Only on lap 15 when Poore hit an oil patch at Copse causing him to spin was Taruffi able to take the third place.

With Taruffi's return to third place, the three works Ferrari cars would once again be in dominant control of the race. Farina was maintaining a solid gap to Ascari who was leading the race by 20 seconds. However unreliability problems would afflict Farina once again, a misfiring engine would bring the former world champion into the pits. The mechanics were forced to change the spark plugs, the pit stop dropping him well down the order. Poore was now in third ahead of Hawthorn, Downing and Parnell. Farina exited the pits in sixth, however his engine misfire continued to plague him and he was forced to concede the position to Thompson's Connaught.

Farina was not the only one to have engine problems, earlier in the race, David Murray and Tony Gaze had both seen engine failures on their Cooper's and HWM's. Trintignant became the second Gordini to go out of the race when he had gearbox failure on lap 21.

Despite winning the F3 race, Stirling Moss was having a miserable time in the ERA car. Since the start of the race, the ERA had been encountering a misfire. Moss had the plugs changed, however there was little improvement and he retired the car on lap 36. The Connaughts and Cooper's had taken up the charge and hopes for the British crowd, leading the field behind the Ferrari's. The Connaughts, although quick were struggling with fuel consumption. The need for a fuel stop dropped them out of the front running order. Poore and Thompson exited sixth and seventh, behind Hawthorn, Farina and Parnell. Downing meanwhile had a terrible stop, dropping down to ninth having also fallen behind the privateer Ferrari of Roy Salvadori.

At the front, Ascari had extended his lead to a full lap ahead of teammate Taruffi in second position. Hawthorn was doing excellently, ensuring a British car and driver remained in the podium position. The Connaughts of Poore and Thompson were staging an excellent comeback, they had quickly moved past Parnell and the misfiring Farina, however Hawthorn in the Cooper seemed to be uncatchable.

The remainder of the race was fairly processional, the final retirements saw two of the HWM's go out of the race. Duncan Hamilton went out on lap 44 with engine troubles whilst Peter Collins had ignition failure in the final stages. Ascari would go on to take yet another dominant win, edging ever closer to his first world championship victory.

Taruffi took second position ahead of Hawthorn who was able to hold off the raging Connaughts of Poore and Thompson to take a podium finish in front of his home crowd. Farina would be disappointed in not achieving any points, Ascari's lead rival would continue to fall behind his younger teammate in the standings.