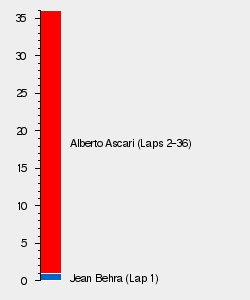 The 1952 Belgian Grand Prix was the third race of the 1952 Formula One season, set to take place at the Circuit de Spa-Francorchamps, Francorchamps, Spa, Belgium over the weekend of 22 June 1952. The race took place under wet track conditions.

This race was won by Alberto Ascari of Ferrari, putting him in a tie for first place in the World Drivers' Championship with Piero Taruffi. This would also be Mike Hawthorn's first Formula One Grand Prix.

The 1952 Belgian Grand Prix would also have the honorary title of the European Grand Prix of 1952. The long and treacherous Spa-Francorchamps circuit would play host to the third round of the world championship, three weeks after the season opener's at Bremgarten in Switzerland and the Indianapolis 500 in the USA.

The three weeks in between the Swiss and Belgian rounds of the championship saw much action in the non-championship races in Formula Two. However during this time, there would be notable tragedy in the lead-up to the Belgian Grand Prix. Luigi Fagioli, the famed pre-war racer who had been a championship contender in 1950 as well as the joint winner alongside Juan Manuel Fangio of the 1951 French Grand Prix had suffered serious internal injuries in a touring car race in Monaco. Shortly after this, Fangio himself, the reigning world champion had broken his neck whilst racing the new Maserati A6GCM for the first time at the Monza Grand Prix. Fangio it seemed would survive, however it was likely his injuries would keep him out of racing for the remainder of the season, leaving little hope in defending his crown. His former Alfa Romeo teammate, Fagioli, however was not so lucky. Only two days before the race at the Belgian Grand Prix, Fagioli at age 54, had succcumbed to his injuries.

The practice sessions were totally dominated by Ascari in his Ferrari 500. The Ferrari lead driver was three seconds faster than teammate Farina in second, whilst the third Ferrari of Taruffi was a further seven seconds off Ascari's best 4:37.0 time. The Ferrari's were left unchallenged in the timesheets, Manzon's Gordini in fourth was fifteen seconds behind Ascari's pole time. Behra continued to impress by putting his Gordini into fifth.

The British contingent followed thereafter, Hawthorn in his first grand prix leading the timesheets to put his Cooper sixth on the grid. Hawthorn was remarkably nine seconds faster than Alan Brown in the second fastest Cooper. Brown, however would be glad to escape a large accident in practice unscathed. Brandon was the final Cooper driver in twelfth position. Wharton's Frazer Nash was right behind Hawthorn on the timesheets whilst the local driver, Frère was the fastest of the HWM cars in eighth. The new ERA had a troublesome debut, Moss had very little track time, his car having continually piston problems in the engine. Moss however did well to recover and put the ERA in tenth position, a single place ahead of HWM rival, Peter Collins.

De Tornaco was disappointed to be only thirteenth in his private Ferrari 500, however he still outclassed the other privateer Ferrari of Rosier who was stuck down in seventeenth. Macklin of HWM was in fourteenth whilst the Aston Butterworth's debut at the hands of Montgomerie-Charrington would start from fifteenth. Gaze, driving the private HWM was in sixteenth ahead of Bira in the old Simca-Gordini model.

Claes was well off the pace, his first works drive with Gordini saw him manage only nineteenth on the grid, he sat ahead of fellow Belgians, Laurent and Legat. The final grid position was occupied by O'Brien's Simca-Gordini, six seconds slower than Legat's Veritas, one grid place ahead of him.

The practice sessions had been completely dry, however as the cars began to line up on the grid, a downpour began to afflict the circuit. At the start, Taruffi stalled his Ferrari and fell to ninth position. Manzon, forced to take avoiding action around Taruffi's motionless Ferrari also dropped back. Behra made a fantastic start, by the end of the first lap he had moved past Farina and Ascari to take the lead of the race. By the end of the first lap, Behra led ahead of Ascari, Farina, Hawthorn, Wharton, Frère, Brown, Manzon and Taruffi. Moss had also performed a good start, he had moved his ERA up into fifth position, however he would not make it to the end of the first lap. The ERA's troublesome engine seized, locking the rear wheels and sending Moss spinning off the circuit.

Behra had taken the initial lead, however Ascari and Farina continued to pressure him, on the second lap whilst exiting La Source, the wild Behra spun, dropping behind the two Ferrari's. The Ferrari's thereafter began to open up a lead, Ascari gradually pulling away from Farina in second.

The rain was falling more heavily, however it did not prevent the Ferrari cars from pushing hard. Whilst Ascari and Farina led the race, Taruffi was performing a storming comeback after his dreadful start. By the end of lap four, Taruffi had found his way back into fourth position. Dropping out of the race was Collins's HWM, pulling into the pits on lap three to retire with half shaft failure. Rosier then pulled out of the race with transmission failure on lap six. Wharton in sixth place then had a major accident, his Frazer Nash spinning backwards at Stavelot and crashing through a barbed wire fence. Wharton was lucky to emerge with only cuts and bruises following a major accident.

Taruffi's rise to fourth place had been swift, however Behra sitting in third place was proving much more troublesome to overtake. After ten laps of sitting behind Behra, Taruffi finally moved into third place on lap fourteen. However this did not last long, only a couple of corners after passing Behra, Taruffi spun his car at Malmedy, Behra behind had no where to go and collided with the spinning Taruffi. Both cars ended up in a ditch on the side of the circuit, however whilst they both luckily emerged from their wrecks, they were both out of the race.

The Aston Butterworth's debut would come to an end when Montgomerie-Charrington pulled out of the race with engine failure on lap seventeen. The race was left to be fairly processional, Ascari was dominating at the front of the race with Farina in a comfortable second. Mike Hawthorn had been doing an amazing job on his world championship debut, he had been running as high as third, however Manzon, who had taken up the Gordini charge following Behra's retirement had overtaken Brown and Frère to move into fourth position. Hopes for a podium on his debut were dashed for Hawthorn when he was forced into a pit stop due to a leaky fuel tank.

The rain eased off towards the end of the race, the drivers taking it relatively easy in the race's final stint. Ascari would win the race after creating almost a two-minute gap ahead of Farina, who would finish in second position. Ascari fell just short of a Grand Chelem, having led all of the laps of the race, with the exception of the first lap in which Behra was the leader. This would have been his first of five Grand Chelems that he would score in his career. Manzon was pleased to come home in third to score his first podium, the Gordini's proving they could be a somewhat frustration to Ferrari's domination.

Cooper once again scored points in the championship, the youthful Hawthorn impressing all to score a fourth place finish in his private Cooper T20. Paul Frère was a popular fifth place, the Belgian motorsport journalist demonstrating his worth by scoring points at his home race. De Tornaco, Claes, Brandon, Bira, Macklin, Laurent, Legat, O'Brien and Gaze rounded out the final finishers in the race. Last place finisher, Gaze, notably hitting a bird in the latter stages of the race.