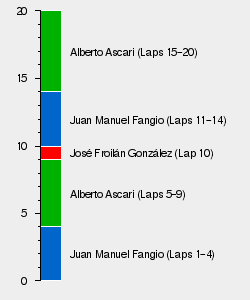 The 1951 German Grand Prix was the sixth race of the 1951 Formula One Season, set to take place at the Nürburgring, Nürburg, Germany over the weekend of July 29, 1951.

This race was won by Alberto Ascari of Ferrari. This was Ascari's first Formula One victory.

For the first time since before the Second World War, the German Grand Prix would return to the grand prix calendar. Germany had been banned from competing in motor racing, its grand prix taken from the calendar and its manufacturer's barred entry as part of recompense for its part in the Second World War. In 1951, the nation that had dominated grand prix in the 1930's would finally have its motor racing restrictions lifted. There were some doubts of returning to the gruelling Nürburgring. The notorious Nordschleife circuit had a reputation as being one of the most dangerous in the world, not to mention the symbolic home of Nazi Germany's presence in motor racing during the time of the Mercedes and Auto Union domination of the 1930's.

Alfa Romeo would of course be defending their honours in Germany. However, the team was no longer the undisputed number one of grand prix racing, the Ferrari team had final caught up in the development race and had won its first grand prix in Silverstone. The reigning champion, Giueseppe Farina was growing frustrated. He was sitting only six points behind teammate Fangio, the leader of the current championship. Fangio, who had clearly been the fastest of the Alfa Romeo drivers in 1951 was suggested to have been getting preferential treatment by his mechanics according to Farina. There were rumours suggesting Farina may leave the team, having engaged talks with BRM, the team pushing back their championship charge to 1952 after their successful debut in Silverstone. Fangio however remained comfortable in the team, however Consalvo Sanesi in the final car had not been quick throughout 1951. Sanesi opted to return to his role as test and reserve driver with Felice Bonetto getting the full time seat for the remainder of the season following his successful Silverstone debut.

Ferrari were left rejuvenated following their British victory. The team had finally drew level with the Alfa Romeo's and were expecting a follow-up victory at the Nurburgring. Defending their honour were their four cars of Ascari, Taruffi, new signing González and the returning Piero Taruffi, who had missed the previous two rounds due to illness. For the second race this season, Rudolf Fischer would be entering his private Ferrari sportscar into a Formula One event.

After withdrawing from the British race, the Simca-Gordini squad returned for the German race. Their usual line-up of Robert Manzon, Maurice Trintignant and Andre Simon were representing their cars.

After a diminished representation in Silverstone, the Talbot-Lago's were once again the major representation of the field in Germany. Ecurie Rosier fielded Louis Rosier and Louis Chiron whilst there was other private entrants of Philippe Étancelin, Yves-Giraud Cabantous, Duncan Hamilton, Pierre Levegh, Johnny Claes and the debutant, Jacques Swaters.

Enrico Platé returned to the grid with cars prepared for Emmanuel de Graffenried and Paul Pietsch, the German veteran being the only representative of Germany in the return of the German Grand Prix.. Antonio Branca had made his grand prix return for 1951 at Germany, the mysterious Swiss driver now racing in a more modern Maserati 4CLT/48. Brazil's best racing driver, Chico Landi, would also make his Formula One debut with his Brazilian race team in a private Maserati 4CLT/48. Prince Bira and his Maserati-OSCA entrant once again withdrew their entry.

Erik Lundgren, the notable Swedish racer who had notably competed throughout his career in a self-built motor racing car known as an EL, powered by an old Ford V8 engine was planning to make his race debut. It was a disappointment when motorsports self-made man failed to show up at the circuit with his home made car.

Paul Pietsch had started practice in his Enrico Platé Maserati, however part way through the first practice, Alfa Romeo invited Pietsch to guest drive one of their cars for the race. The team's original entrant, Consalvo Sanesi had decided to resign as a driver and thus the team offered the car to Pietsch who gladly accepted. Pietsch was one of the last remaining active drivers to have raced for the dominant silver arrows cars of the 1930's. The home crowd were now hoping that their man, now in competitive machinery could help return some of the lost glory that Germany had during the times of Mercedes-Benz and Auto Union in the sport.

However it seemed the Alfa Romeo's were losing their competitiveness, it was the Ferrari squad that were proving the fastest on the Nurburgring circuit. Ascari took the first pole position of his championship career, two and a half seconds ahead of González in second place with a time of 9:58.8. Aside from Ascari and González, Fangio was the only driver to set a sub ten minute time on the circuit. The best Alfa Romeo car was remarkably four seconds adrift of the best Ferrari. Farina was fourth ahead of the other Ferrari's of Villoresi and Taruffi. Pietsch's first race for Alfa Romeo put him in seventh position, whilst the final Alfa Romeo of Bonetto could only manage a dismal tenth position on the grid.

Rosier was fifteenth whilst the Maserati's were losing all competitiveness with De Graffenried and Branca sixteenth and seventeenth. The final grid positions were occupied by a consortium of Talbot-Lago's belonging to Claes, Levegh, Hamilton, Étancelin and Swaters.

The Scuderia Ambrosiana Maserati of David Murray had a huge accident during the Saturday practice sessions, luckily Murray was unhurt however his car was wrecked. The team were forced to pack up and withdraw, Murray being denied the opportunity to race.

As was the case in practice, the weather at the Nurburgring remained bright and sunny ahead of the race day on the treachorous circuit. At the start, from fourth on the grid, Farina got a perfect start and took the lead ahead of Fangio, Ascari and González. However before the end of the first lap, all three drivers had made their way past Farina and the champion fell back into his starting position.

Fangio then began to pull out a slight three second lead over Ascari in second place, Ascari having his own short lead over González and Farina behind him. The top four were already opening up a solid lead over the next group of cars consisting of Pietsch, Villoresi and Taruffi. On lap two, De Graffenried became the first retirement with engine troubles, a lap later both Branca and Chiron had followed him out of the race. On lap four, Étancelin became the next to fall when his Talbot-Lago encountered gearbox trouble.

Pietsch who was running well in fifth at his home race, spun his Alfa Romeo on the second lap. Luckily, he was able to continue, however he rejoined in the last position of the race. Fangio's lead on the race began to reduce as Ascari's Ferrari had begun to catch up to him. On lap eight, Ascari forced his way into the lead at the Breidscheid corner. After losing the lead, the Alfa Romeo's began making their moves to the pits. Farina, however would not get the opportunity to pit as his car retired with overheating trouble.

With Fangio having pitted, Ferrari led a one-two with Ascari leading González. Fangio was third ahead of Villoresi whilst Taruffi had dropped back when he came in for an unscheduled pit-stop to change his spark plugs. The Ferrari's as expected were later to pit than the Alfa Romeo's, their cars heading for the pits approaching half distance. Fangio retook the lead, the two Ferrari's losing out after their pitstop with Ascari and González exiting second and third.

Simon retired on lap eleven with overheating whilst Pietsch who was left down in the midfield following his earlier spin, went off the circuit and crashed into the embankment of the North Curve. Pietsch was out of the race and only moments later, Bonetto's Alfa Romeo had retired with magneto problems. All of sudden, Fangio was the last surviving Alfa Romeo in the race, the Alfa squad had not once yet had all of its cars finish out the points or retire. Fangio was their last hope of defending that honour.

The better fuel economy of the Ferrari's was proving to be a major advantage, the more thirsty Alfa Romeo of Fangio was forced back into the pits on lap 14. A gearbox problem meant that Ascari had developed a significant lead over Fangio whilst González was still distanced in third place. The final retirements of the race saw Hamilton pull over his Maserati, Trintignant suffer a blown engine and then Cabantous having another big accident on lap 17 with his Talbot-Lago. Luckily the Frenchman emerged unscathed.

Ascari seemed well in position to take his first championship victory, following Fangio's final pit stop, the Ferrari lead man had taken control. However on lap 17 he began to develop a slow puncture, there was fear that once again Ascari would be denied a race win. However Ascari's lead was so large that even in losing time in an unscheduled pit-stop, he maintained the lead to Fangio in second place.

Ascari went on to take his first world championship victory, 30 seconds ahead of Fangio, his Alfa Romeo rival. For the second race in succession, the Alfa Romeo had been outclassed by the Ferrari 375. Ascari's win had put him second in the world championship with 17 points, however Fangio with only two rounds to go maintained a ten point lead. González who finished on the podium for the second race in succession was now in fourth in the championship. Fourth position being tied between González, Villoresi and Farina in the championship. Farina's title defense had not been going to plan, he had only one win after a series of mechanical failures that saw him drop from second to fifth in the standings following Germany.

Villoresi and Taruffi rounded out the final points finishers, Ferrari having all of their cars finish the race and occupying four out of the five points places. Even the private sportscar of Rudolf Fischer did well to finish the race a lap adrift in sixth. Manzon was the lone Simca-Gordini to finish ahead of the Talbot-Lago's of Rosier, Levegh, Swaters and Claes.

Only the top five are displayed